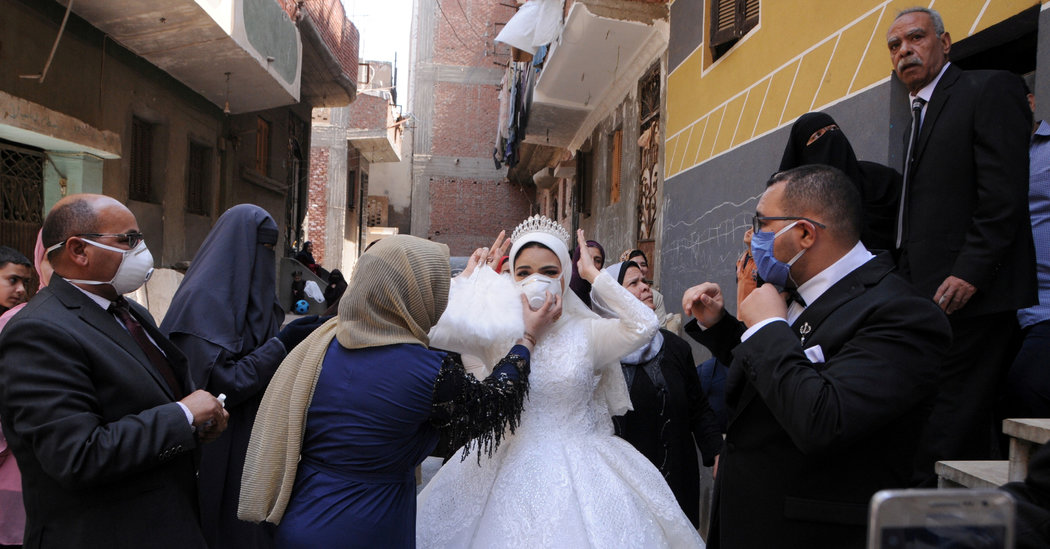 CAIRO — Carfuls of hooting men careened through the half-empty streets of Cairo, then skidded to a halt on Qasr el Nil, the most famous bridge over the Nile. A newly married couple leapt out, trailed by festive relatives, hoping for a coveted photo at an iconic beauty spot.

The police, charged with enforcing social distancing, had other ideas. A tow truck prowled back and forth on the bridge, siren blaring, as officers barked orders at wedding parties and other lingerers to move on.

The same scene played out over several days last week in Cairo, where the minor matter of a global coronavirus pandemic has failed to quell couples’ ardor. Like many others across the Middle East, they have pushed ahead with weddings — even as wedding halls and hotels have shuttered, honeymoons evaporated and curfews slammed down.

Some countries are adapting. In the United Arab Emirates, hurried couples can now obtain wedding licenses online. In Kuwait, marriage courts offer services by special appointment. (Divorces, however, are unavailable.)

In Saudi Arabia, some couples have skipped the once-ironclad tradition of holding a wedding celebration before moving in together, even if they are already legally wed.

In Egypt, couples have shrunk their ambitions to small family gatherings; others have flouted public health restrictions with secret parties and guerrilla photo shoots, despite the health risks.

Their haste has stemmed from a desire to beat the deadline of Ramadan, which started Friday. The holy month is a solemn period when weddings are rare.

With virus infections in Egypt still at the low end of the curve, about 3,900 cases for 100 million people, some wedding-goers seemed to believe they were invincible.

“This pandemic can’t touch us,” said a reveler named Islam, who gave just his first name as his wedding party scrambled to take photos on the bridge at a moment when the police were absent. The groom, in a tuxedo and sneakers, posed with the bride, in a white dress. Then everyone bundled into three cars and took off.

Such scenes of determination, in the middle of a major health crisis, stem from a simple truth: Marriage may be important everywhere, but in the Middle East, it often cannot wait.

In most Arab countries, marriage confers independence, the right to live together, cash gifts, a culturally approved sex life and, for women, heightened status in societies still heavily tilted in favor of men.

“Marriage is the beginning of real life,” said Hania Sholkamy, an anthropologist at the American University in Cairo. “It’s the legitimation of a real sexual life. There’s a transfer of wealth. And it’s the start of procreation. In our culture, there’s a genuine relish of babies.”

As the pandemic hurtled toward Saudi Arabia, Moath Mohammad, 23, and Manar Dhafer, 26, were forced to downsize their gender-segregated wedding in Riyadh until they were left with a hasty 10-person lunch for immediate family at home. Mr. Mohammad’s mother could not make it in time, so they looped her in on Snapchat.

They had a little food, a little daytime dancing. Less than 90 minutes later, everyone scattered to get home before the 3 p.m. curfew.

The moment had been almost a decade in the making. There were years of getting to know each other online after meeting on MSN Messenger, the days of him persuading his family to approach hers and the week she decorously pretended to weigh his offer.

Though they had legalized the marriage in February, Saudi social custom presented one more hurdle: They were not allowed to live together or act as husband and wife until they gave a party.

Postponement was not an option.

“I can’t just hold everything for three months or four months just for a party,” said Ms. Dhafer, a dentist. “We’ve waited too long already.”

Like many other Arab couples who chose to wed mid-pandemic, they went, in a few moments, from barely being able to see each other to a 24/7 two-person lockdown.

Instead of honeymooning in Europe, as planned, they are spending their first weeks as newlyweds watching reruns of “Friends” and “How I Met Your Mother” in their new apartment and negotiating shared chores like dishwashing.

“It’s been only three weeks,” Ms. Dhafer said, “but it feels like it’s been two months of us knowing each other.”

Yet tiny lockdown weddings go against every instinct in cultures where family is all.

“In the Western world, marriage is about the couple coming together and being one,” said Roula Theodory, a co-owner of Cherry On Top, a Dubai event consultancy. “The culture here is you have two families coming together.”

The trend also has practical implications, said Rania Salem, a sociologist at the University of Toronto Scarborough. Forgoing a celebration could mean losing cash gifts that newlyweds need to set up house. For their families, it is a lost opportunity to solidify their social standing.

Lebanon, in particular, is famed for its razzle-dazzle weddings. The most extravagant can run well over a million dollars and involve thousands of guests; even middle-class families tend to go all out.

Lara Haidar, a body piercer, and Husam Jawhari, a hairdresser, invited 3,000 people to their nuptials in Aramoun, a village south of Beirut. But a wave of antigovernment protests forced them to postpone their November wedding, and the coronavirus scuppered their second attempt.

So on a recent Sunday, Mr. Jawhari sprayed his bride’s hot-pink hair into an updo topped with a tiara and picked her up on a horse for a two-person party — just them, a cake and some music. They accepted congratulations via Facebook.

In Egypt, Helmy Mustafa and Hassnaa Maher also had big plans: a party for 400, followed by a pilgrimage to Saudi Arabia and a honeymoon in Bali. Instead, they made it as far as a deserted airport hotel, where they took photos.

In the back of a car on the way to exchange their vows, they went live on Facebook, singing along to a popular song while friends flooded their feed with congratulations.

“This is what God intended for us,” said Ms. Maher, a bank teller, speaking by video from the apartment that has become their honeymoon suite. “And frankly, it’s better than anything I could have imagined.”

Still, even modest celebrations carry deadly risks. One Cairo neighborhood was placed under quarantine for two weeks after the virus spread during a pre-marriage ritual in which a bride’s relatives gather to fill a trousseau with belongings for the marital home.

Two guests later died, as did three others at an engagement party at a village in Beheira, in the Nile Delta, in early April. The rising death toll is prompting tougher police action: On Wednesday the authorities in Cairo broke up a wedding party at a hall in Giza while the bride and groom were having their photos taken.

The pandemic is also rattling longstanding social strictures. For Hala, a jewelry designer in Jeddah, Saudi Arabia, it was unthinkable to move in with her husband, Ahmed, an engineer, until their legal marriage had been ratified with the three-day party they had planned in Dubai.

After a strict 24-hour lockdown forced them to cancel, Ahmed persuaded Hala to start sleeping over at his family’s house. Now the couple, who gave only their first names to protect their privacy, is quarantining together with Ahmed’s parents.

“For us, it’s strange to get married and move in, and then do a wedding,” Hala said. “But when I talked to my dad, he was like, ‘Who sets these rules?’”

Some rules, though, are sacred.

A few weeks ago, a pair of Jordanian-American newlyweds forced into quarantine at a Dead Sea resort became minor celebrities after a video showed them celebrating on their own as resort workers clapped at a safe distance. Jordan’s king and queen even sent a gift.

Two weeks later, they made it to the groom’s family home, where, as another video showed, the groom, Aws al-Awneh, hugged and kissed his parents as relatives applauded in the street. The couple had been ordered to avoid contact with others.

The Jordanian police promptly arrested Mr. al-Awneh for violating the order by hugging his parents. Newly married, newly released from quarantine, he landed in jail.

Erin Benzakein of Floret Farm and her 850 glorious varieties of...

Best electric screwdriver 2020: Everyone should have one

Coronavirus Spares Gaza, but Travel Restrictions Do Not

How to roast vegetables (and let your oven do all the...

Suspect Is Arrested Over Stabbings in Birmingham, England