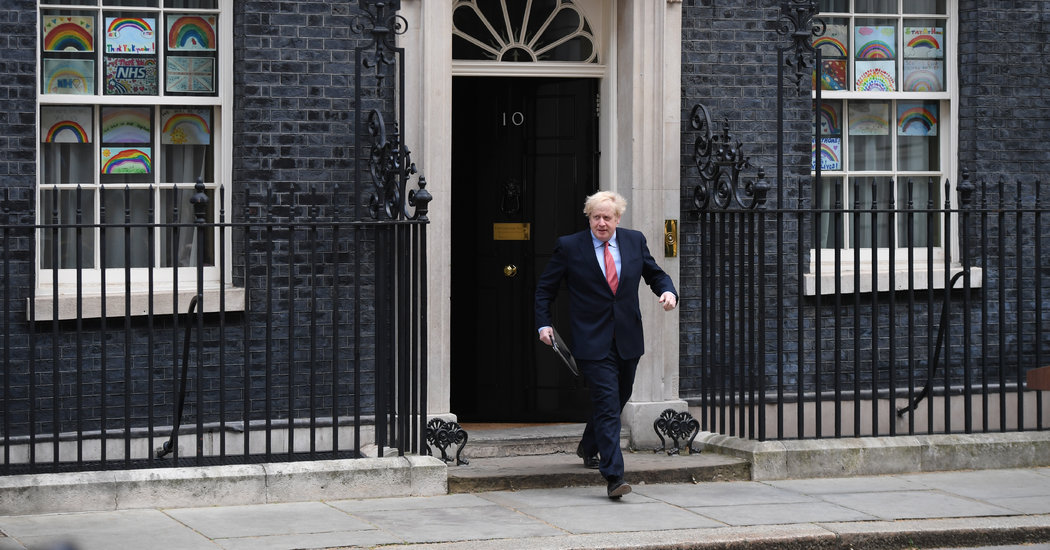 LONDON — A pale but vigorous-sounding Prime Minister Boris Johnson returned to work on Monday, declaring that the coronavirus that nearly killed him was like an “unexpected and invisible mugger” the British people had begun to wrestle to the floor but had not yet fully disabled.

For all his determined brio, Mr. Johnson’s message to his lockdown-weary nation was somber, underscoring the hard choices that Britain faces as the economy languishes and the death toll from the virus soars above 21,000.

Mr. Johnson, who was discharged from the hospital only two weeks ago, signaled that the government would keep some social-distancing measures in place for the foreseeable future. To lift them too soon, he warned, would mean “not only a new wave of death and disease but also an economic disaster.”

The government has said it will reassess the lockdown on May 7, and it is likely to relax some restrictions. But it is lagging badly in testing and contact tracing, which experts view as a precondition for reverting to a more normal status, like in South Korea, which pioneered an ambitious national testing program.

Mr. Johnson’s return will inject energy into a government response that had seemed to drift in recent weeks, analysts said. But it does not alter the fact that Britain has fared especially badly during the pandemic, with a death toll approaching that of Spain and Italy. And the figures understate the true toll by at least a third, since they do not include people who perish in nursing homes or their own houses.

“His return is a fillip for the government,” said Craig Oliver, a former director of politics and communications at Downing Street. “The problem is the expectation that he can wave a magic wand, and everything will be OK.”

Other than Mr. Johnson’s reference to the mugger, there was little evidence on Monday of the glib, happy-go-lucky prime minister who resisted imposing strict social distancing measures and boasted about shaking hands with coronavirus patients during the early days of the outbreak. Now, he seems resigned to a prolonged period of disruption and worried about the risk of a renewed outbreak.

With the daily death toll in hospitals falling, there is evidence that Britain has passed the peak of infections. Mr. Johnson emphasized the National Health Service’s success in scaling up capacity, which insured that hospitals have not been overwhelmed in Britain as they were in northern Italy.

Professor Neil Ferguson, an epidemiologist at Imperial College London who is an influential adviser to the government, warned on Sunday that easing the restrictions too abruptly could result in more than 100,000 additional deaths from a second wave of infections.

A study published last month by Dr. Ferguson and his Imperial colleagues, which projected that an unchecked spread of the virus could kill as many as 510,000 people in Britain, prompted the government to pivot from its laissez-faire response to the lockdown that Mr. Johnson imposed on March 23.

The path out of the crisis, Dr. Ferguson and other experts agreed, lies in an aggressive program of testing those with virus symptoms, and tracking their contacts, similar to what South Korea and Germany have done.

Britain, however, has struggled to reach its target of conducting 100,000 tests a day by the end of April.

Though it has the capacity to conduct more than 50,000 tests, it carried out only 37,000 on Sunday, the last day for which data were available. Officials now argue that, because of a lag in reporting the tests, it will not be clear by the deadline of Thursday whether it has met its target.

“But we need to be moving much faster as each day in lockdown is costly,” she said, “and lockdown can only be lifted when there is a good handle on the virus.”

Britain has also fallen short in providing doctors and nurses with masks and gloves. And it had faced criticism for its secrecy over the membership and deliberations of a scientific panel that advises the government on key decisions.

On Monday, Downing Street announced a minor concession by saying it would name the members of the panel — the Scientific Advisory Group for Emergencies, known as SAGE — but only if they agreed to be publicly identified.

The debate among scientists will affect critical decisions about when and how to relax the lockdown, which in turn could temper the dire economic impact of the pandemic. Tensions within the cabinet over the economic fallout have spilled into a wider debate in Mr. Johnson’s Conservative Party.

“There is a recognition that we need to do much more to get the economy moving,” Graham Brady, chairman of the influential 1922 Committee of Conservative backbench lawmakers, told the BBC. “There is a limit to how long people will tolerate those things.”

The authorities have been surprised, even at times unsettled, by the public’s compliance with the lockdown, which is not policed as aggressively as in countries like France. But parks and streets in London and other cities filled up with pedestrians and cars over a sunny weekend, suggesting that patience was running thin.

Mr. Johnson has displayed his own impatience. He contracted the virus in late March but continued to take part in meetings and read official papers while isolated in his apartment next door to 10 Downing Street, which some colleagues say may have aggravated his illness.

On April 5, after Mr. Johnson could not shake a cough and temperature, he was hospitalized and later moved into the intensive care unit, where he was treated with oxygen. After his release on April 12, he described a harrowing ordeal in which he was kept alive by a team of night nurses.

Mr. Johnson’s decision to go back to work so soon raised eyebrows, even among allies who sought to make a virtue of it. Nadine Dorries, a government health minister, said on Twitter that most people who have been as sick as Mr. Johnson was need “at least three months to recover their strength and repair their immune system.”

‘Whack-a-Mole’ Against Virus Sounds Reasonable, Unless You’re the Mole

NASA Scientist Jailed in Turkey for 3 Years Recounts His Ordeal

Ballpark Peanuts, a Classic Summer Pleasure, Have Been Benched

Razer’s excellent Viper gaming mouse is free when you buy the...

Xbox Game Pass list: What games can you play and how...

Poland and Hungary Use Coronavirus to Punish Opposition

2 Killed in Knife Attack in French Town Under Lockdown