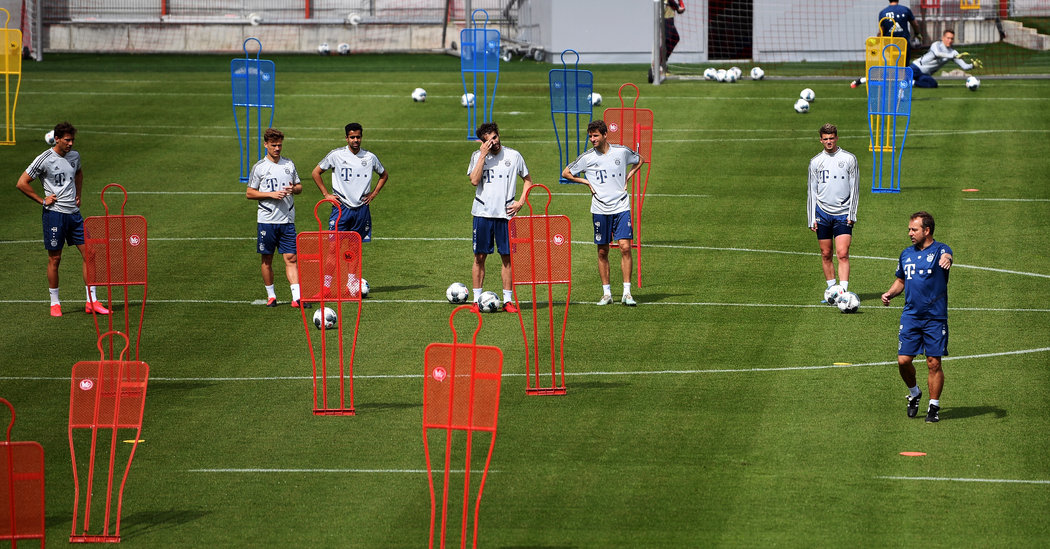 At least, it seemed, the Dutch had made a decision. Alone among Europe’s soccer leagues, they now had some clarity about what the immediate future held. On Friday morning, the Netherlands became the first country in Europe to call off its soccer season. There would be no champion crowned, no teams condemned to relegation. It was over.

Within a few hours, though, the first wisps of fog started to descend. Utrecht was sitting in sixth place when the coronavirus pandemic struck. It had played one game fewer than Willem II, in fifth, and was only three points behind. Utrecht was a single win away from overtaking its rival and claiming the country’s final European qualification spot.

By Friday night, Frans van Seumeren, Utrecht’s owner, was declaring on television that his club would “use all the lawyers” it could muster to fight the decision to end the season.

Cambuur, a club in Leeuwarden, was just as unhappy. It had been clear at the top of the country’s second division, already dreaming of, and planning for, a return to the top flight next season. But with no relegation, there could be no promotion. “This is the greatest shame in the history of Dutch sport,” the club’s coach, Henk de Jong, said. Cambuur, too, was considering legal action.

By Saturday, just a day after the Netherlands heard its season was over, things did not seem quite so clear-cut. The action might be finished on the field, but there remains a threat that part of it will play out in court.

The feeling is familiar to all those involved in trying to plot European soccer’s way out of its indefinite hiatus. Decisions tend not to stick. Plans for resumption or cancellation or some half measure often seem to have a shelf life measured in minutes. As the Dutch experience proves, complete certainty remains elusive.

Six weeks on, there is, at least, a broad vision of what should happen next, decided Thursday on a video conference led by UEFA, European soccer’s governing body. Ideally, national leagues would play to a finish. For most, that remains the intention. Across the continent, most competitions are showing flickering signs of life.

In Germany, which is likely to have the first league back, the Bundesliga has a plan to play again, in empty stadiums, as early as May 8, though that may yet be delayed, depending on the advice of governors and health experts. Italy’s prime minister, Giuseppe Conte, has said his country’s teams should be able to return to training on May 18, with games expected in June and July.

Although Spain’s health minister has said there will be no soccer before the summer, the country’s authorities have three dates in mind for a restart — May 27, June 6 and June 28 — and an agreement in place with the players’ union to play every three days. It also has a training protocol in place to allow players to return, though it has not yet been approved.

Poland’s authorities are confident of restarting the Ekstraklasa, the country’s top league, on May 29, provided the conditions in a five-step safety plan are met.

England seems more cautious: Though Arsenal, West Ham and Brighton allowed their players to return to training on Monday, while respecting social distancing rules, no dates have been set for competition to resume. The Premier League believes it may be able to play again in June, however, and has reportedly received encouragement from the government that training may be permitted from the middle of May.

Everywhere, though, there is an understanding that the virus is in control of the schedule, that soccer cannot unilaterally decide when it is safe to return. In that case, UEFA has outlined a plan, too. If leagues cannot be completed in full, then shortened formats to determine qualification for European competition, like playoffs, should be explored.

If even that proves not to be feasible, if the pandemic does not abate or if government legislation prohibits it, then UEFA’s final recommendation is for leagues to be decided on “sporting merit,” rather than striking seasons that had run three-quarters of their race from the record books, abandoning them and starting over.

The experience of the handful of countries that believe it is not feasible to play on, though, suggests that this outcome offers just an illusion of simplicity. Only in Belgium has the move been met with little resistance. Even there, though, a vote to confirm the cancellation of the season — with Club Brugge declared champion — was postponed on Monday until May 4.

In accordance with UEFA’s guidance, Belgium will not annul its season. Besides crowning Club Brugge, it will also send K.A.A. Gent to the Champions League. But Belgium’s circumstances are distinct from most of its peers and rivals: Brugge had a substantial lead at the summit, and only one game of the regular season remained.

Elsewhere, attempts to find clarity have led only to greater obscurity. The Royal Netherlands Football Association, known as the KNVB, the country’s highest soccer authority, made its decision based on the decree from Mark Rutte, the prime minister, that no soccer would be permitted, with or without fans in the stadium, until September at the earliest.

It met UEFA’s recommendations, too. Rather than annul the season entirely, it sent the top two teams, Ajax and A.Z. Alkmaar, into the Champions League, while those in the spots below qualified for the Europa League. It did not name a champion, because Ajax and A.Z. were tied on points. Even that solution, though, could lead to a legal challenge.

Scotland, meanwhile, has canceled the season for leagues below its top flight — citing the need for prize money to be distributed now to keep clubs afloat — but promotion and relegation will be recognized. That is seen as a blueprint for determining the Scottish Premier League season, with Celtic named champion and Heart of Midlothian relegated.

The process, though, has been addled by controversy. The vote among the country’s clubs over whether to abandon the season descended into farce, with results made public before each team had submitted its ballot.

Rangers — Celtic’s fierce rival, and currently second in the top flight — has called for an investigation and demanded a suite of resignations from the executives who oversaw the vote. It claims it has evidence of clubs’ being railroaded into voting for the Scottish authorities’ proposal to abandon.

For all the planning and all the ideas, soccer’s return is still rooted more in hope than in expectation. Germany’s intention seems ambitious. Spain has yet to receive medical and political clearance. England, a hardy constituency, privately and publicly, continues to advocate annulment as the only morally respectable outcome.

At this stage, it is easy to parse the argument. The road back to the soccer season still seems impossibly long and daunting, too fragile, too exposed. The early signs from elsewhere, though, from the Netherlands and Scotland, suggest that the road out, the road away, is just as precarious. Even those places that want clarity cannot find it, not quite, not yet.

Secrets of the Most Thankless N.B.A. Job: Referee

At Least 70 Dead in Mexico From Drinking Tainted Alcohol

Locker Rooms Are Petri Dishes. Can the N.F.L. Clean Up Before...

He Needed to Train. David Duchovny’s Pool Was Out There.

Boris Johnson has announced a big easing of lockdown restrictions from...

During Coronavirus Lockdowns, Some Doctors Wondered: Where Are the Preemies?

In a Season of Challenges, the Mets See a Unique Opportunity,...

Abiding by the Confederate Flag Ban Inside Talladega, Grudgingly