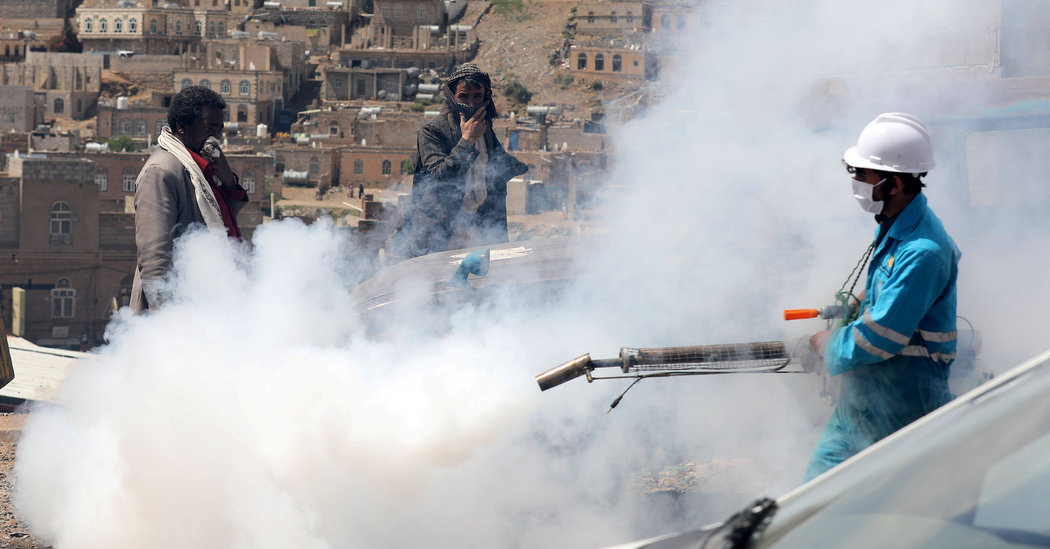 CAIRO — The first confirmed expansion of the coronavirus in Yemen was reported on Wednesday, prompting renewed calls from aid groups and the United Nations for a humanitarian cease-fire to help combat the infection at a time when the country is mired in increased fighting, widespread hunger and a major cholera outbreak.

The authorities in Yemen’s port city of Aden announced a cluster of five cases, up from the previous tally of one, and immediately imposed a two-week lockdown including the closure of shops, mosques and markets selling khat, a mild stimulant used by many Yemenis.

Although the cluster was tiny in comparison with neighboring countries, it confirmed the worst fears of health workers who have warned for weeks that even a mild coronavirus outbreak could quickly overwhelm Yemen’s devastated health system.

Already, a spate of torrential rains has exacerbated a cholera outbreak, with 110,000 cases in 290 of Yemen’s 331 districts since January, the United Nations said on Wednesday. Flash floods in the south of the country last week worsened the situation, and now five million children under the age of 5 are at risk, it said.

Last month the United Nations secretary general, António Guterres, appealed to Yemen’s warring parties to implement an immediate humanitarian cease-fire to help stave off the threat from Covid-19, the disease caused by the coronavirus.

Since then, the fighting has gotten worse.

Airstrikes by the Saudi-led coalition against the Houthis in northern Yemen increased by 30 percent last week, according to the Yemen Data Project, which monitors the war. The spike in fighting occurred despite a unilateral cease-fire declared by Saudi Arabia on April 9.

In recent months, the crown prince of Saudi Arabia, Mohammed bin Salman, has sought to dial back his involvement in the Yemen war that he launched in 2015. But his enemies, the Iran-supported Houthis, have launched a major assault on the oil rich Marib Province in central Yemen.

Houthi fighters shelled a prison in Taiz on April 6, killing five women and a child, the United Nations said.

Until Wednesday, Yemen’s only declared case was a 60-year-old port worker who later recovered. But on Tuesday the United Nations warned the virus was probably spreading undetected. The cluster of cases in Aden confirmed those suspicions.

Aden was also the scene for a twist in the country’s conflict last weekend when the country’s main separatist group, the Southern Transitional Council, declared self-rule and seized control of the city.

The city’s woes are multiplying. Last week, flooding killed 21 residents and washed away the homes of hundreds of people. Now it faces a possible coronavirus contagion, even as the separatists threaten to go to war with the forces of the Saudi-backed president, Abdu Rabbu Mansour Hadi, Yemen’s weak leader.

“Yes, things really can get worse,” wrote Peter Salisbury, a Yemen analyst at the International Crisis Group, on Twitter.

A coronavirus outbreak, combined with a surge in fighting, could push the country to “the brink of a catastrophe,” warned Tamuna Sabadze, the Yemen director at the International Rescue Committee.

In a statement, Ms. Sabadze called on the United States, Britain and France to exert more pressure on the antagonists in the conflict to commit to a “nationwide cease-fire and return to political negotiations to end the war.”

The Killing of Qassim Suleimani Was Unlawful, Says U.N. Expert

Cairo Badly Needed a Detox. Lockdown Supplied One, at a Steep Price.

Etsy has started cracking down on coronavirus merchandise

Where to spend and where to save: a room-by-room guide

The Lakers Are Elite Again, and Ready to ‘Turn Up’

5 BRs, Pool/Hot Tub, Mediterranean Vu; Too Far to Commute to...