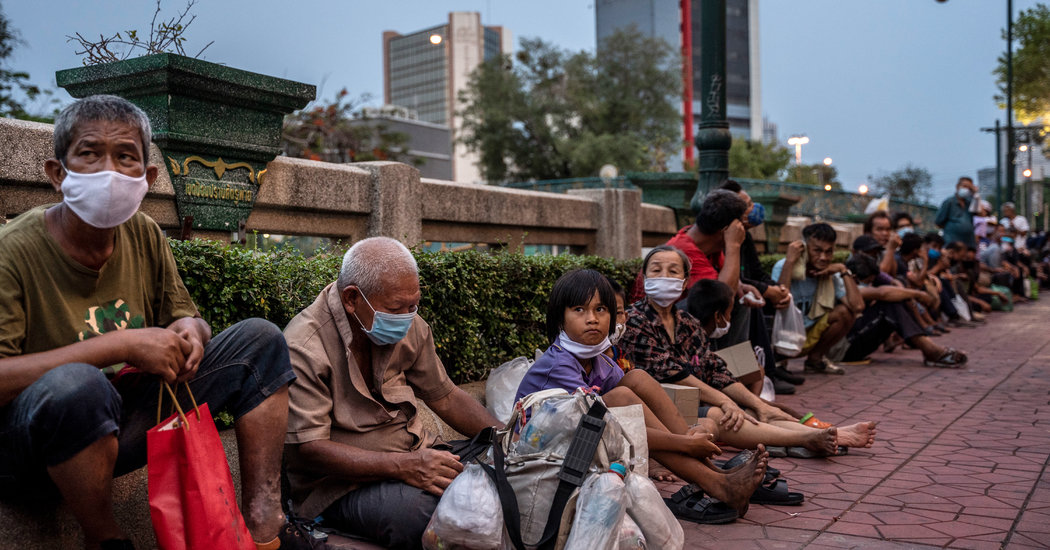 She was just 12 when she dropped out of school and began clocking in for endless shifts at one of the garment factories springing up in Bangladesh, hoping to pull her family out of poverty.

Her fingers ached from stitching pants and shirts destined for sale in the United States and Europe, but the $30 the young woman made each month meant that for the first time, her family had regular meals, even luxuries like chicken and milk.

A decade later, she was providing a better life for her own child than she had ever imagined.

Then the world locked down, and Shahida Khatun, like millions of low-wage workers around the world, found herself back in the poverty she thought she had left behind.

In a matter of mere months, the coronavirus has wiped out global gains that took two decades to achieve, leaving an estimated two billion people at risk of abject poverty. However indiscriminate the virus may be in its spread, it has repeatedly proven itself anything but that when it comes to its effect on the world’s most vulnerable communities.

“The garment factory helped me and my family to get out of poverty,” said Ms. Khatun, 22, who was laid off in March. “But the coronavirus has pushed me back in.”

For the first time since 1998, the World Bank says, global poverty rates are forecast to rise. By the end of the year, 8 percent of the word’s population, half a billion people, may be pushed into destitution, largely because of the pandemic, the United Nations estimates.

Ms. Khatun was among thousands of women across South Asia who took factory jobs and, as they entered the work force, helped the world made inroads against poverty.

Now those gains are at grave risk.

“These stories, of women entering the workplace and bringing their families out of poverty, of programs lifting the trajectories of families, those stories will be easy to destroy,” said Abhijit Banerjee, a professor at the Massachusetts Institute of Technology and a winner of the 2019 Nobel Prize for economics.

While everyone will suffer, the developing world will be hardest hit. The World Bank estimates that sub-Saharan Africa will see its first recession in 25 years, with nearly half of all jobs lost across the continent. South Asia will most likely experience its worst economic performance in 40 years.

Most at risk are people working in the informal sector, which employs two billion people who have no access to benefits like unemployment assistance or health care. In Bangladesh, one million garment workers like Ms. Khatun — 7 percent of the country’s work force, and many of them informally employed — lost their jobs because of the lockdown.

For Ms. Khatun, whose husband was also laid off, that means that the familiar pangs of hunger are once again filling her days, and she runs into debt with a local grocer to manage even one scant meal of roti and mashed potato a day.

The financial shock waves could linger even after the virus is gone, experts warn. Countries like Bangladesh, which spent heavily on programs to improve education and provide health care, may no longer be able to fund them.

“There will be groups of people who climbed up the ladder and will now fall back,” Mr. Banerjee, the M.I.T. professor, said. “There were so many fragile existences, families barely stitching together an existence. They will fall into poverty, and they may not come out of it.”

The gains now at risk are a stark reminder of global inequality and how much more there is to be done. In 1990, 36 percent of the world’s population, or 1.9 billion people, lived on less than $1.90 a day. By 2016, that number had dropped to 734 million people, or 10 percent of the world’s population, largely because of progress in South Asia and China.

Some of the biggest gains were made in India, where 210 million people were lifted out of poverty from 2006 to 2016, according to the U.N.

Since 2000, Bangladesh brought 33 million people — 20 percent of its population — out of poverty while funding programs that provided education to girls, increased life expectancy and improved literacy.

Famines that once plagued South Asia are now vanishingly rare, and the population less susceptible to disease and starvation.

But that progress may be reversed, experts worry, and funding for anti-poverty programs may be cut as governments struggle with stagnant growth rates or economic contractions as the world heads for a recession.

In India, millions of migrant laborers were left unemployed and homeless overnight after the government there announced a lockdown. In parts of Africa, millions may go hungry after losing their jobs and as lockdowns snarl food aid distribution networks. In Mexico and the Philippines, remittances that families relied on have dried up as primary breadwinners lose their jobs and can no longer send money home.

“The tragedy is, it’s cyclical,” said Natalia Linos, executive director of Harvard University’s François-Xavier Bagnoud Center for Health and Human Rights. “Poverty is a huge driver of disease, and illness is one of the big shocks that drive families into poverty and keep them there.”

When it comes to a pandemic like the coronavirus outbreak, Ms. Linos said, the poor are even more outmatched than people with means. They cannot afford to stock up on food, which means they must go more frequently to stores, increasing their exposure. And even if they have jobs, they are unlikely to able to work from home.

A resolution that committed the United Nations to eliminating poverty and hunger and providing access to education for all by 2030 may now be a pipe dream.

More than 90 countries have asked the International Monetary Fund for assistance. But with all countries hurting, well-to-do nations may be too strapped to provide the aid the developing world needs or offer debt forgiveness, which some countries and aid organizations are calling for.

To avoid having large chunks of their population slipping into devastation, countries need spend more, Mr. Banerjee said. In times of crises, like after World War II, economies rebounded because governments stepped in with big spending packages like the Marshall Plan.

But so far, economic stimulus packages and support for those newly out of work have been weak or nonexistent in much of the developing world.

While the United States has committed nearly $3 trillion in economic stimulus packages to help the poor and small businesses, India plans to spend just $22.5 billion on its population of 1.3 billion — four times the size of America’s. Pakistan, the world’s fifth-largest country, has committed about $7.5 billion, far less than Japan’s $990 billion stimulus package.

The owner told employees that even after the pandemic, he may no longer have work for them. The demand for clothing in Western countries may drop if people have less to spend, he said.

Ms. Khatun worries she and her family will be evicted from the small room they rent, with a bathroom and kitchen they share with neighbors.

If they are thrown out, she said, they will return to the village she left a decade ago as a child determined to to improve her lot in life.

“My only dream was to ensure a proper education for my son,” she said. “I wanted people to say, ‘Look, although his mother worked for a garment factory, her son is well educated and has a good job.’

“That dream is now going to disappear.”

In a Victory for Women in Sudan, Female Genital Mutilation Is...

How Did Iran’s Qassim Suleimani Wield Power? We Tracked the Quds...

How to tell if you're buying the new Nintendo Switch or...

Getting on a Plane? Please Take the Food Out of Your...

As Coronavirus Keeps the West at Bay, China Moves to Tame...