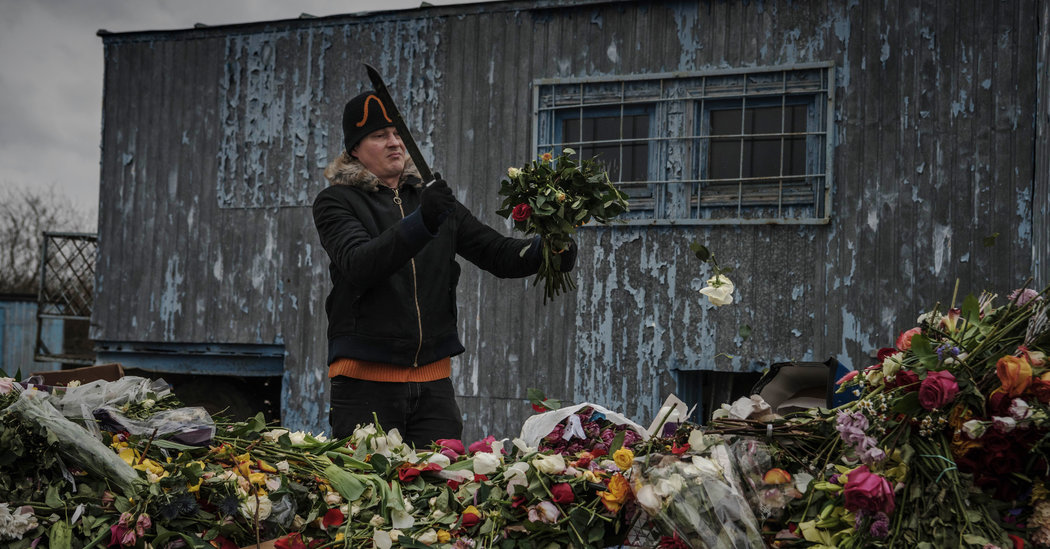 ST. PETERSBURG, Russia — Two weeks into the coronavirus lockdown, Aleksandr B. Zatulivetrov, a Russian businessman, had had enough.

In defiance of President Vladimir V. Putin’s orders, he announced that he would reopen one of his two restaurants in the center of St. Petersburg unless the Kremlin declared a state of emergency, a legal provision that would allow him to stop payments to banks and landlords and force the government to offer compensation.

“Where are your voices? We all have tens of workers who need jobs!” Mr. Zatulivetrov, 48, wrote in a plea to other restaurant owners to join him. ‘We are dying!”

Thanks to a “rainy day fund” of more than $550 billion, accumulated from the sale of oil when the prices were high, Russia is likely to weather the economic storm created by the coronavirus better than many countries. But it risks losing much of a sector that Mr. Putin has for years touted as the key to Russia’s long-term economic success — small and midsize businesses.

Unlike many Western governments, the Kremlin has so far provided little support to business. The overall relief package in Russia has amounted to less than a quarter of what is being injected in Germany, and most of the support has been aimed at helping large corporations, many of them owned or closely entwined with the state. Only around $10 billion has been pledged to small businesses so far.

Aleksei A. Navalny, one of Mr. Putin’s most vocal critics, has said that the aid should be pumped up to $27 billion, but the Kremlin has accused him of populism.

As the coronavirus pandemic began to advance through Russian cities at the end of March, Mr. Putin issued orders that required businesses to both shut down and continue paying salaries. But he did not specify where owners were supposed to get the money.

“I paid everything I had to my employees,” Mr. Zatulivetrov, 48, said in an interview.

With entrepreneurs like Mr. Zatulivetrov largely left to fend for themselves, the pandemic is threatening to undo decades of effort to diversify Russia’s economy. If small and medium businesses fail, the health crisis will leave Russia’s economy disfigured and even more dependent on the Kremlin.

Those businesses account for a small part of Russia’s output compared with state-run behemoths like Gazprom and Rosneft, but they are a particularly vibrant part of the economy, employing more than 18 million people, or a quarter of the work force, and pioneering new fields beyond oil and natural gas.

Since the “shock therapy” market overhaul of the early 1990s, Russian entrepreneurs have gone from shady trades such as selling tainted alcohol in kiosks to, in some cases, running internationally acclaimed restaurants and producing high-quality clothing and food. However, the attitude of the Russian authorities toward them has changed little since the times when the Soviet financial police, the Department Against Misappropriation of Socialist Property, fought ruthlessly against “profiteers” reselling American jeans.

In March, Mr. Putin reversed his earlier praise for small businesses, saying in an interview that “there are certain grounds” to regard business owners as swindlers, echoing the Soviet bias against entrepreneurs but somewhat undercutting his own cheerleading of smaller industry.

“The government believes people in retail are all crooks,” said Irina M. Nurullayeva, owner of a chain of four flower shops in St. Petersburg. “The problem is that all these officials have not been in touch with normal life since the 1990s, when this could have been the case.”

Lalya N. Sadykova, an owner of a chain of 12 barbershops and three beauty salons in St. Petersburg, said she had so far received no help at all. Her multiple letters to the local authorities have gone unanswered. With little money left, she bought about four pounds of rice, flour, buckwheat and a bottle of cooking oil for each of her 17 neediest workers, many of them young single mothers.

She complained that taxes had been deferred, rather than waived, during the lockdown.

“They had to cancel taxes for the duration of quarantine, not simply offer a deferral,” Ms. Sadykova, 36, who started her business in 2002 with only $500 in her pocket, said in an interview in one of her closed salons. “We scream everywhere that we are such a great country, but when push comes to shove, the government cannot assume responsibility.”

So far, the Russian government has offered subsidized loans, limited tax cuts and tax holidays to help businesses. The subsidized loans became an embarrassment when the country’s economy minister could not get one himself despite calling two banks to test the system.

Mr. Putin also offered two grants of $160 per worker to cover a portion of their salaries for April and May. But few qualify for the grants, which cover only companies that have retained at least 90 percent of their employees as of April 1. In any case, $160 is inadequate for the losses incurred, covering only a third of an average salary and only for two months, business owners said.

“If this lasts for longer than three months, the whole story of small business will become part of the history textbooks,” said Eduard M. Emdin, 50, a co-owner of Wynwood, a hotel in St. Petersburg named after a neighborhood in Miami famous for its graffiti walls.

Mr. Emdin is still paying salaries and even offered to put up some of his 33 employees in the hotel’s 38 rooms, most of which stand empty. In May, he faces a $100,000 payment to the city government, but so far there has been no talk of deferring it.

Propped up by a windfall of petrodollars, the Kremlin has little incentive to rescue small companies. In 2019, the Russian budget received 39 percent of its revenue by taxing the sale of oil and gas. Those revenues will drop significantly this year with the drop in oil prices, but the Russian Finance Ministry said it would use $27 billion from its rainy day fund to make up the difference.

“Their top priority, bluntly, is to save money and spend as little as possible without creating significant social and political instability,” said Vladimir Tikhomirov, a Russian economist working for BCS Global Markets in Moscow, said of the Kremlin. “If it is a small cafe or restaurant that will never be able to sustain the crisis, they will not see it as a big tragedy.”

In 2015, two medical students and an English teacher from provincial Russian towns came to St. Petersburg with a dream of opening a bar. Having capital of just $15,000, they started in a basement under one of St. Petersburg’s sprawling courtyards, not far from where Fyodor Dostoyevsky wrote “The Brothers Karamazov.”

The Mexican-themed bar, El Copitas, opened at the height of a domestic economic crisis, propelled by another drop in oil prices and Western sanctions over the annexation of Crimea and meddling in Ukraine. Despite that, within a year, El Copitas was voted one of the top 100 bars in the world. Last year, it was ranked No. 27.

Artem V. Peruk, one of the bar’s co-founders, said that the Mexican government had offered them more help than the local one in St. Petersburg.

Many other businesspeople in St. Petersburg said that they did not expect help from the Russian government and would be happy just to be left alone.

“I achieved everything honestly and I don’t expect any help,” said Denis S. Shevchenko, the owner of Gate 31, a brand of locally produced clothing. “Just give me the rules and let me open, even for one customer at a time,” he added.

Mr. Zatulivetrov, the restaurateur, no doubt felt the same. But four days after he announced his plans to reopen, the police called him for a talk. Though he had already received 177 reservations, he quickly changed his mind and, in a sudden turnaround, became concerned about public health.

“Only by sitting at home can we prevent the avalanche-like spread of the coronavirus,” he said in a Facebook post last week.

Another entrepreneur, Sergei V. Shamakhov, 35, who in four years built a dental clinic with a staff of 50, described the conundrum.

“In Russia, you can develop a business rapidly, but there is a downside,” he said. “You can die out as quickly, too.”

Baseball From Korea: A Filling Breakfast for Bereft Fans

As Coronavirus Strikes Prisons, Hundreds of Thousands Are Released

Brazil’s Halting Coronavirus Response Has Made It a Hotspot

Adobe’s Photoshop and Fresco iPad apps get new $10 per month...