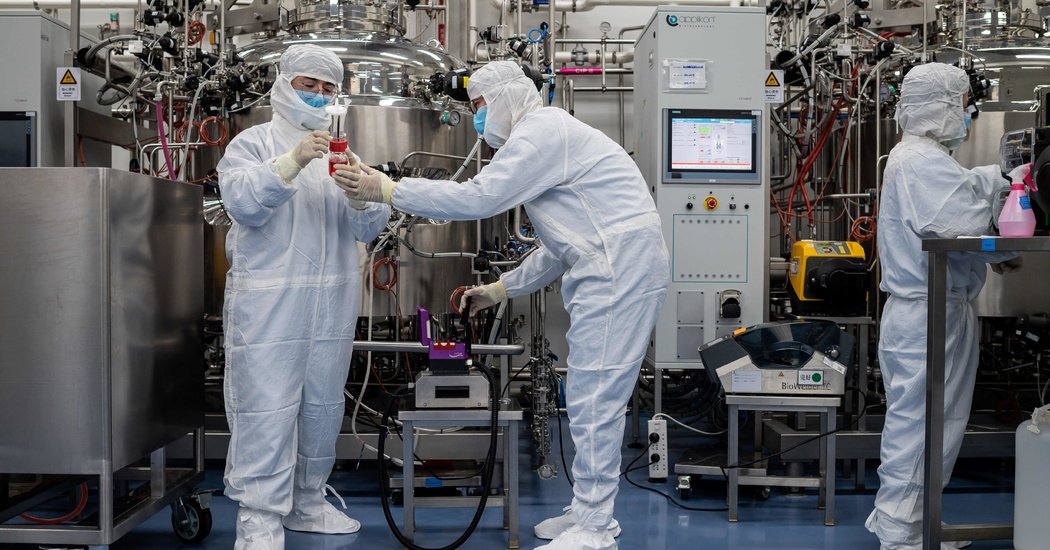 China wants to beat the world in the race to find a coronavirus vaccine — and, by some measures, it is doing just that.

Desperate to protect its people and to deflect growing international criticism of how it handled the outbreak, it has slashed red tape and offered resources to drug companies. Four Chinese companies have started testing their vaccine candidates on humans, more than the United States and Britain combined.

But China’s leaders have empowered a vaccine industry that has long been mired in quality problems and scandals. Just two years ago, Chinese parents erupted in fury after they discovered ineffective vaccines had been given mostly to babies.

Finding a vaccine isn’t enough. China’s companies must also win over the trust of the public, who might be more inclined to choose a foreign-made vaccine over a Chinese one.

“The Chinese now do not have confidence in the vaccines produced in China,” said Ray Yip, the former head of the Gates Foundation in China. “That’s probably going to be the biggest headache. If they didn’t have all those incidents, people will probably line up by the miles to get it.”

The need is urgent. More than 247,000 people have died globally, by official figures as of Monday, and the true count is probably much higher. The coronavirus remains stubbornly difficult to stamp out — even China, which officially appears to have tamed the spread, has suffered from sporadic outbreaks.

China also wants to deflect accusations that its silencing of early warnings contributed to the global pandemic. Developing a vaccine for the world would, in addition, burnish its standing as a global scientific and medical power.

So China has made its vaccine a national priority, though it hasn’t disclosed spending details. One senior official said a vaccine for emergency use could be ready by September. State media has made a celebrity out of Chen Wei, the Chinese military’s top virologist, who is leading one of the vaccine efforts. The public is responding.

Huang Shiyue, an 18-year-old first-year medical student in Wuhan, left her apartment on a recent early Sunday morning for the first time in three months to take a taxi to a wellness center an hour away. There, she offered up her arm in the name of science.

But in an illustration of how difficult it will be to find a safe and effective treatment, Ms. Huang grew dizzy and sick.

“If I can help and benefit people with one little move,” she said, “then I think this is a very worthwhile thing.”

China’s vaccine drive has put Beijing’s considerable strengths and glaring weaknesses on display. With its firm hand on the levers of Chinese industry, Beijing can corral companies and scientists to reach national goals.

At the same time, China’s vaccine companies have been accustomed to a closed political system that has a history of covering up safety scandals and protects them from foreign competition. Few invest heavily in research and development, and they have not discovered many products with global impact.

Instead, many invest more in selling and distribution, a large chunk of which includes managing relationships with local disease control centers. Experts say that creates incentives for corruption.

China’s regulators also tend to look the other way when it comes to state-owned firms, which make up about 40 percent of the vaccine industry. Many vaccine makers operate with an expectation of impunity, knowing that even if they are found to have produced faulty products, they are unlikely to be shut down.

The vaccine that Ms. Huang received is being developed by CanSino Biologics, a Tianjin-based pharmaceutical firm, and the medical science arm of the People’s Liberation Army. The CanSino vaccine was the first to enter Phase 2 trials, which in the hierarchy of drug testing means it is further along than the world’s other candidates, though there is no guarantee that it will be proven effective. (It has been tested so far on 508 people; a candidate from Oxford University in Phase 1 trials, or earlier-stage testing, has been administered to twice as many people.)

The Wuhan institute was involved in a 2018 scandal in which defective vaccines for diphtheria, tetanus, whooping cough and other conditions were injected into hundreds of thousands of babies. China imposed a $1.3 billion fine on another virus maker involved, Changchun Changsheng. The scandal led to the firing of dozens of officials and pledges of a swift industry cleanup.

The Wuhan institute has been sued at least twice in China by plaintiffs who have alleged that the institute’s vaccines have caused “abnormal reactions,” according to court documents. In both cases, the court ruled that the Wuhan institute had to partially compensate the victims a total of roughly $71,500. Its executives have been accused at least three times of bribing officials at local centers for disease and control in various provinces to thank them for purchasing their vaccines. The executives were convicted but no criminal charges were pursued against the company.

Sinovac Biotech had also been involved in a bribery scandal, according to court documents. From 2002 to 2014, a court in Beijing said, the general manager of Sinovac Biotech gave China’s deputy director in charge of drug evaluations nearly $50,000 to help the firm with drug approvals. Sinovac was not charged. The general manager was a man surnamed Yin, the documents showed. Chinese media reports have said that person is the current chief executive, Yin Weidong, who held the title of general manager from 2001 to 2017.

Sinovac, the Wuhan institute, and its parent, China National Biotec Group, did not respond to requests for comment.

Despite the companies’ earlier stumbles, the Chinese government has given them permission to accelerate trials. Regulators in the United States and other places have done the same for other companies. The Wuhan institute, Sinovac and the Beijing institute got combined approvals to run the first two phases, a decision questioned by several Chinese scientists, who felt that safety results from the first phase should be evaluated before the second phase was begun.

Ding Sheng, the dean of the pharmacy school at Tsinghua University in Beijing, said that some companies were “adopting unconventional methods” in the preclinical research stage, running tasks like the design process and animal modeling at the same time when they should be done consecutively, according to the People’s Daily, the Communist Party’s official newspaper.

“I understand the people’s eager anticipation of a vaccine,” Dr. Ding was quoted as saying. “But from a scientific point of view, no matter how anxious we are, we cannot lower our standards.” He did not respond to a request for comment.

Dr. Chen’s academy issued calls on the internet for phase one volunteers. Ms. Huang successfully registered for the second round on April 10. The next day, she got a call and text message: Please come tomorrow.

“Of course, I was worried at the beginning,” she said. “To say you’re not at all worried is impossible, right?” She surfed the internet and called her teacher, who listed pros and cons. She sought advice from her parents.

Then she went. Workers ran an antibody test, to make sure she was not already immune to the coronavirus, an H.I.V. test and a pregnancy test.

The participants were divided into low- and medium-dose groups and another placebo group, as part of a “double-blind” experiment. They were not told their group.

Fifteen minutes after Ms. Huang got her shot, she started to feel dizzy. Her stomach hurt. Her heart began beating fast. She got diarrhea.

Dr. Chen and other doctors checked her. Someone offered her hot water. She took a walk in the sun. Finally, they took her in an ambulance to a subway station, where she took a taxi home.

Shi Zibo, a junior in college, also signed up to be a volunteer and got the shot on April 12. On the fourth day, he got a slight fever but said he has no other side effects.

“I felt very proud when I received the call,” Mr. Shi said. “There are not many opportunities for me in to contribute to other people in this life, so I will not regret it, regardless of the final result.”

China Hails Its Virus Triumphs, and Glosses Over Its Mistakes

Copper Won’t Save You From Coronavirus

Erin Benzakein of Floret Farm and her 850 glorious varieties of...

In a Season of Challenges, the Marlins Finally Break Through

Searchers Find No Sign of Survivor in Beirut Rubble

With Delay in Afghan Peace Talks, a Creeping Sense of ‘Siege’...