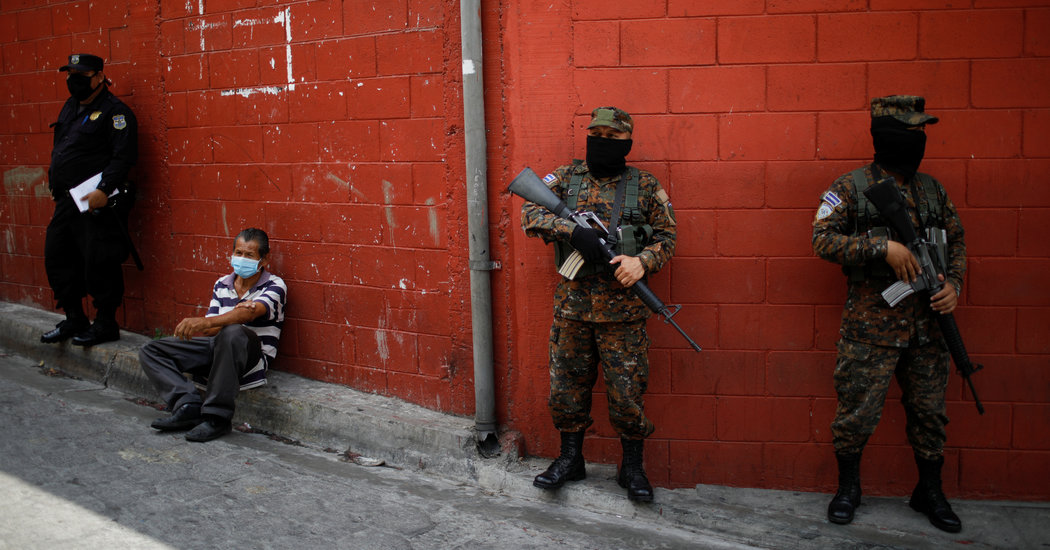 MEXICO CITY — Salvadorans took a gamble when they elected Nayib Bukele president: He was a political outsider, a millennial who had run his campaign largely over social media and offered few concrete details about how he would govern.

Still, voters in El Salvador swept him into office, hoping for a change that would improve lives in a country long hobbled by corruption, poverty and some of the world’s highest murder rates.

His actions in recent months, however, have left many Salvadorans — lawyers, business leaders, human rights advocates, journalists and others — afraid that Mr. Bukele is backsliding into the kind of authoritarian leadership the country fought a civil war to overturn.

In February, Mr. Bukele marched soldiers into Congress to intimidate lawmakers to push through a bill. The following month, he brushed aside Supreme Court orders to stop using the military to detain quarantine violators. Later, he advocated the use of lethal force in a crackdown on the criminal gangs that drive up the country’s murder rate.

“The president is relying more on the military and the police, and those forces are again playing a repressive role,” said Luis Coto, a priest who leads a 15,000-member parish in the center of the country. “We are taking a step backward, regressing to the time of war.”

The election of Mr. Bukele, 38, swept aside the two political parties that had alternated in power since the end of El Salvador’s brutal civil war, in the 1990s. When he declared victory, in jeans and a leather jacket, Mr. Bukele said the country had “turned the page” on the postwar era.

The majority of the population, tired of violence, continue to support him with sky-high approval ratings. Mr. Bukele’s office declined to comment for this article.

But his recent actions have rattled the country’s fragile democracy.

When the legislature was slow to approve additional funding for the military in February, Mr. Bukele brought armed soldiers and police officers into the halls of Congress to pressure them to act. The move triggered a constitutional crisis and revived memories of the military dictatorships that had ruled the country for nearly half a century.

The following month, he sent the army into the streets to enforce one of the region’s strictest lockdowns to prevent the spread of the coronavirus. Soldiers and police officers have locked up thousands of people in containment centers for breaking quarantine, keeping them in the facilities for weeks. The Supreme Court ruled that the detentions were unconstitutional and ordered Mr. Bukele to end them, but he refused.

“Five people won’t decide the deaths of hundreds of thousands of Salvadorans,” Mr. Bukele said on Twitter of the judges’ ruling. “The court doesn’t have the power to implement or remove public health measures.”

Then in April, a surge of murders shattered the relative peace that had prevailed since the pandemic struck and threw into question one of Mr. Bukele’s signature achievements: reducing violence.

In response, he authorized the police and the army to kill gang members if necessary, tweeting, “The use of lethal force is authorized in self-defense or in defense of the lives of Salvadorans.”

One image showed hundreds of prisoners crammed together on the floor, their shaved heads pressed against each other’s bare backs, as guards hovered over them with semiautomatic weapons. The scene suggested little regard for the social distancing rules the state is rigidly enforcing elsewhere.

“There is a humiliation in having everyone half-naked, forced to be touching each other in the public view,” said José Miguel Cruz, an expert on Salvadoran organized crime at Florida International University.

Mr. Bukele announced that he would place rival gang members in the same cell and seal the cells with sheets of welded metal. “They will be inside, in the dark, with their friends from the other gang,” he tweeted.

Reversing the policy of keeping gang members apart sends a clear message, according to Salvadoran security experts. “It’s an invitation for them to kill each other,” Mr. Cruz said.

Salvadoran lawyers, business groups and prominent think tanks have all condemned the president’s actions. Many in the local and international human rights community warned that Mr. Bukele was sliding toward dictatorship. Two top Democrats who sit on the U.S. House Foreign Affairs Committee wrote a letter to the Salvadoran president condemning the “unnecessarily degrading” images from the country’s prisons.

“People who praised him and trusted him in the past are now realizing that we are confronting a president who is authoritarian, irresponsible and immature, who could do irreparable damage to the country,” said Celia Medrano, a Salvadoran activist with the human rights group Cristosal.

The Trump administration has remained quiet. In a recent news conference, Michael Kozak, the acting assistant secretary in charge of the Bureau of Western Hemisphere Affairs at the State Department, said Mr. Bukele’s defiance of the Supreme Court amounted to “differences of opinion over how best to handle quarantine and social distancing issues in the country” and praised the president’s “extremely high popularity ratings.”

Polls show that more than 85 percent of the population approves of the president, whose tough-on-crime persona plays well with Salvadorans tormented by gangs.

In Cojutepeque, a city that has long been a bastion of right-wing sentiment, many residents say they are happy with the way the government is treating organized criminals.

“Families have been beaten down by violence,” said Mr. Coto, who leads a parish in the city. “People say, ‘Sure, kill them if you want.’”

Mr. Coto, 69, said his parishioners were fed up with the two parties that held the presidency for decades, embezzling money and failing to make the country safer. Three of the country’s past presidents have been charged with corruption and one of them received a 10-year prison sentence.

The priest said people in town trust Mr. Bukele, who started his own party, New Ideas, and ran on the slogan, “There is enough money when nobody steals it.” It doesn’t hurt that the government has given $300 to families affected by the pandemic and has handed out free food in poor cities like Cojutepeque.

“He has the messianic persona of a savior, in a situation where about half of the population is poor,” Mr. Coto said. “They aren’t going to criticize the government’s repression.”

Still, the constant presence of armed soldiers has unsettled the town, Mr. Coto said. On a Sunday in late March, he and another priest drove a woman home after Mass. On their way back, a group of military officers pulled them over, interrogated them and threatened detention with violating quarantine.

“We were filled with fear because we thought they were going to take us to a containment center,” Mr. Coto said. “I was trying to explain, but they had their guns.”

The soldiers eventually let them go with a warning. The priest has not left the church since.

Racing a World-Champion Rower in My Garage

After Losing His Legs to a Bomb, Afghan Veteran Is on...

As Tourism Plummets in Thailand, Elephants Are Out of Work, Too