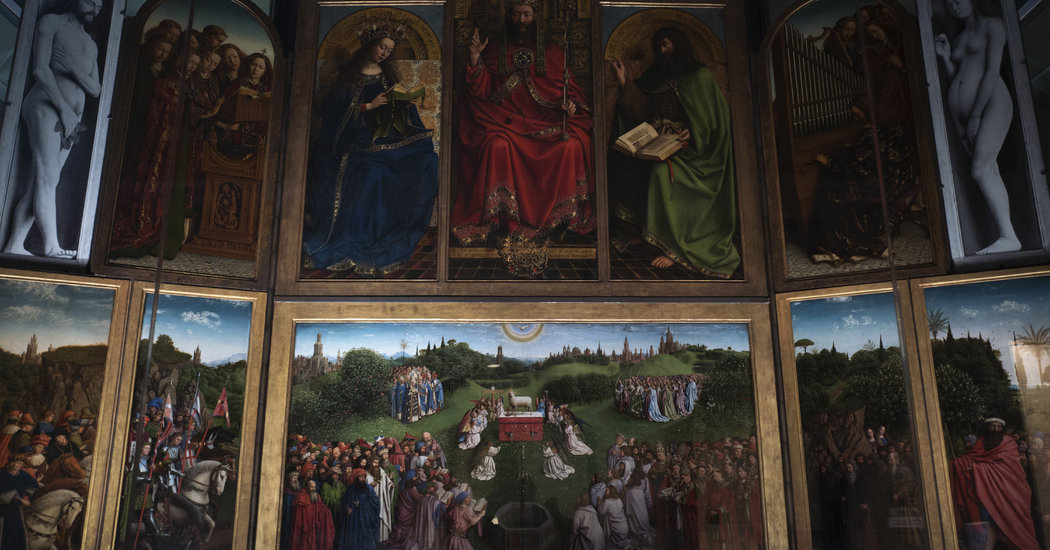 The Ghent Altarpiece was never supposed to leave St. Bavo’s Cathedral again. Not after the 15th-century masterpiece was nearly destroyed by rioting Calvinists in 1566. Not after its panels had been stolen at least six times: once by Napoleon, later by the Nazis (who took the whole thing). Church leaders in Ghent, its Belgian home, were overjoyed in 1945, when the altar by Jan van Eyck and his brother Hubert was returned.

“The cathedral decided it would not leave anymore,” said Maximiliaan Martens, an expert in early Netherlandish painting, who would have a hand in changing this. Dr. Martens, 59, first saw the altarpiece when he was 3, has studied the work of Jan van Eyck for 35 years and helped oversee the restoration of the panels at the Museum of Fine Arts Ghent beginning in 2012. As the work continued, Dr. Martens and museum employees persuaded cathedral authorities, just this once, to lend out some of the recently restored panels.

That coup became the starting point for a blockbuster exhibition, “Van Eyck: An Optical Revolution,” the largest-ever display of van Eyck’s work. It opened on Feb. 1, and the city of Ghent dedicated an entire year to the celebration of van Eyck, plastering walls and even wastebaskets with posters about him. Then on March 13, the museum closed because of the coronavirus, less than halfway through its scheduled run. Last week, the museum announced that the show would not reopen.

“It felt terrible,” Dr. Martens, who was a co-curator of the exhibition, said. “My work was done, the selection, making the catalog, you name it, but I feel very sorry for all those people who haven’t been able to see it.”

Museum exhibitions in much of the world were put on pause in early or mid-March, postponed indefinitely as many countries issued strict stay-at-home orders. But as shutdowns continue, it has become clear that some shuttered shows will not reopen. Others will never open their doors. Many more are in limbo.

The behind-the-scenes work on a major museum exhibition usually takes years, involving fund-raising, difficult loan negotiations with other museums and collectors, scholarship and catalog production, events planning, complicated transport and sometimes major restoration. A cancellation can be heartbreaking for those who have spent years planning an exhibition. For museums that have sunk money into them and depend on the ticket revenues, it can be a grim financial reality. But it might be the only option, as it was for the Museum of Fine Arts Ghent when the Belgian government extended lockdown measures into May.

“It was clear that it would be impossible for us to reopen the exhibition,” Cathérine Verleysen, the acting general director of the museum, said. “We had to take everything into account: renegotiations of loans, new insurance policies, security assignments, et cetera. So we decided not to reopen and not to extend.”

With more than 70 lent objects, all with individual contracts, a postponement would have meant each one would have needed an extension. And, pressingly, the museum sold 144,000 tickets in advance that cannot be used and are being refunded.

“It’s like a big puzzle that was put together in a very careful way,” Dr. Verleysen said, and it’s a puzzle to take it apart, too.

Postponing or extending a show can be a logistical nightmare involving loan extensions, costly insurance and issues with overlapping exhibitions in the future. And even under the best museum conditions, there is only so long that fragile objects can be on display.

“It is so much less complicated to cancel an exhibition than it is to extend or postpone,” said Charlotte Dew of the Touring Exhibitions Group, a nonprofit organization that advises museums mostly in Britain. She said that most of the museum professionals she had spoken to were in “waiting to see” mode and weren’t making final decisions. But, she said, “You can’t just shunt everything forward.”

Some cancellations are already stacking up. The Royal Academy in London has canceled two exhibitions slated for this summer that were traveling internationally from other museums, one of the work of Angelica Kauffman and another of Cézanne’s rock and quarry paintings. At the Royal Scottish Academy, the centerpiece of its programming is an annual exhibition that has been moved entirely online. Because of space issues, the physical version had to be canceled. “We still have hundreds of artworks sitting on the floor of the gallery that didn’t make it onto the walls,” said Flora La Thangue, the gallery manager at the Royal Scottish Academy.

The Museum of Cycladic Art in Athens had planned to open an exhibition of the work of the Greek sculptor Takis that was in London and Barcelona. But right as it was scheduled to leave Spain, a total lockdown was instituted. The museum’s president, Sandra Marinopoulos, said in an email that some loans had been rescinded because no one was willing to accompany the works — and then Greece banned flights from Spain.

Takis died last August in Athens, and his work hasn’t had a major exhibition in his home country since 1995, so the show was much anticipated, Ms. Marinopoulos said. But the artworks had to be returned by October and their next exhibitions, planned three years in advance, couldn’t be moved. “It was our duty and obligation to make this timely and immediate decision,” she said.

Even for postponed exhibitions, waiting to see can last only so long. The Cézanne show that was supposed to travel to the Royal Academy might be able to extend its run at the Princeton University Art Museum, where it opened March 7 (and then closed soon after). The museum director, James Steward, said that he’s negotiating with lenders, who are eager to work with the museum, but uncertainty about reopening dates makes it tricky. “The problem everywhere is that none of us have very good crystal balls,” he said. “It’s hard to even know what to ask for.”

The museum has indefinitely postponed a Jean-Michel Basquiat show that was to open in October, in part because of worries about loans. Also, Dr. Steward said, “The idea of mounting a million-dollar Basquiat exhibition when our students might not be here to benefit from it and be taught from it felt like the wrong priority.” Because of a long-planned renovation of the museum in 2021, he estimated that the postponement would be for four years or more.

With conditions like this in mind, the organizers of the van Eyck show said they felt fortunate that the exhibition was able to open for as long as it did: 129,000 visitors came in the first weeks, which Dr. Verleysen said were large numbers for the museum. At least “we had the opportunity to share this beautiful exhibition,” she said. And, too, the crisis puts things in perspective. “It is very sad for our exhibition, but for so many other things it’s even more sad,” she said.

Dr. Martens will always have the memory of standing in a room filled with van Eyck’s portraits right after they were hung, an experience he said was “indescribable.” Never before had these portraits been in the same room, even in van Eyck’s lifetime. “It was like talking to his patrons, to his wife, to his friends, to his colleagues,” he said.

When they can travel again, the portraits will scatter around the world once more. The Ghent altarpiece will eventually return to the cathedral for good. These works will almost certainly never be reassembled. Dr. Martens said: “This wasn’t just once in a lifetime. It was only once.”

The Nose Needed for This Coronavirus Test Isn’t Yours. It’s a Dog’s.

In Secret Ceremony, Embattled Belarus Strongman Is Sworn In as President

Tootie Robbins, Lineman With Cardinals and Packers, Dies at 62

Burning Cell Towers, Out of Baseless Fear They Spread the Virus

The Dictator Who Waged War on Darfur Is Gone, but the...

Save $40 on the Amazon Fire 7 Kids Edition tablet today

A Conversation With the Ultrarunner Yassine Diboun

On Racism and British Fashion