This is an insanely good plate of pasta that has no right to be this easy or fast. Just seven ingredients and 10 minutes is all it takes to make the best pasta you’ve had in a long time.

Like Bolognese, some people would say that this pasta only works in the specific city in Italy it’s named for: Norcia, where the pigs are so good they fly around upon clouds of rainbows and sunshines. And it’s true: both the province of Umbria and the city of Norcia are famous throughout Italy for almost every ingredient in this dish. From the salumi and the sausage, to the cheese and the wine, to even the olive oil; Umbria and Norcia are widely regarded as producing some of the best food and ingredients in Italy. This ragu is kind of intended to show off basically everything they’ve got. In the right season, you might even get truffles (they’re famous for those too, because of the pigs) on your pasta. 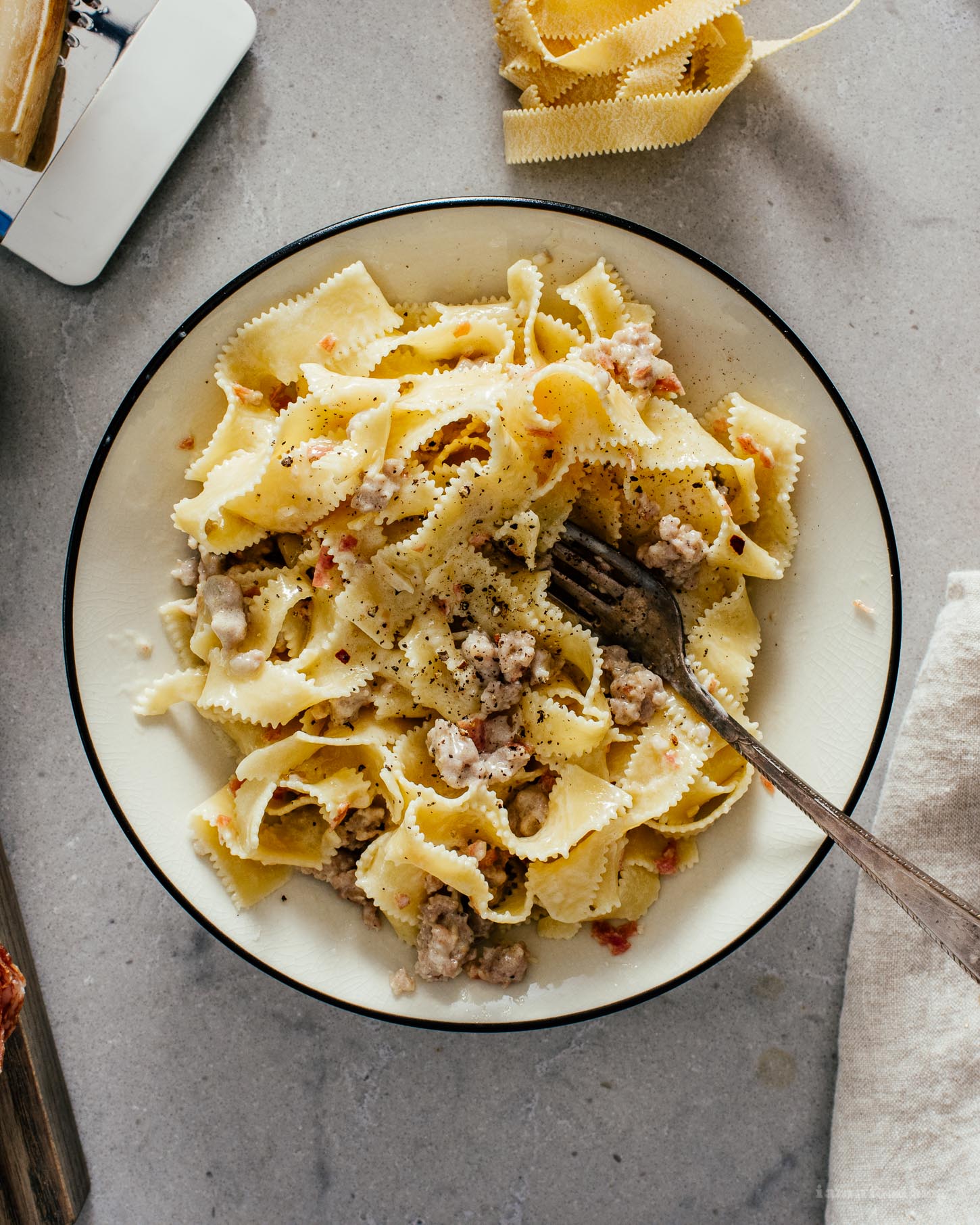 Unfortunately, not too much of this good stuff makes it outside of Italy, so unless you visit Norcia, you may never know just how much better their local pecorino di umbria tastes to your grocery store’s pecorino romano, or how much better the local wine is to our (awesome) two buck chuck. In our current mid-pandemic world, it could be a long time before that can happen.

But that doesn’t mean you can’t bring a little taste of Umbria to you through this dish, and likewise, the lack of imported ingredients doesn’t mean that this dish isn’t still both somehow magically good and super fast to make. I would argue that by using great local ingredients, you keep to the spirit of the dish and it will still produce something so good it’ll blow your mind, something better than if you had just used all imported ingredients. You’d never believe just 7 ingredients can turn into something you’d pay $30 a plate for in a restaurant, but it’s true. 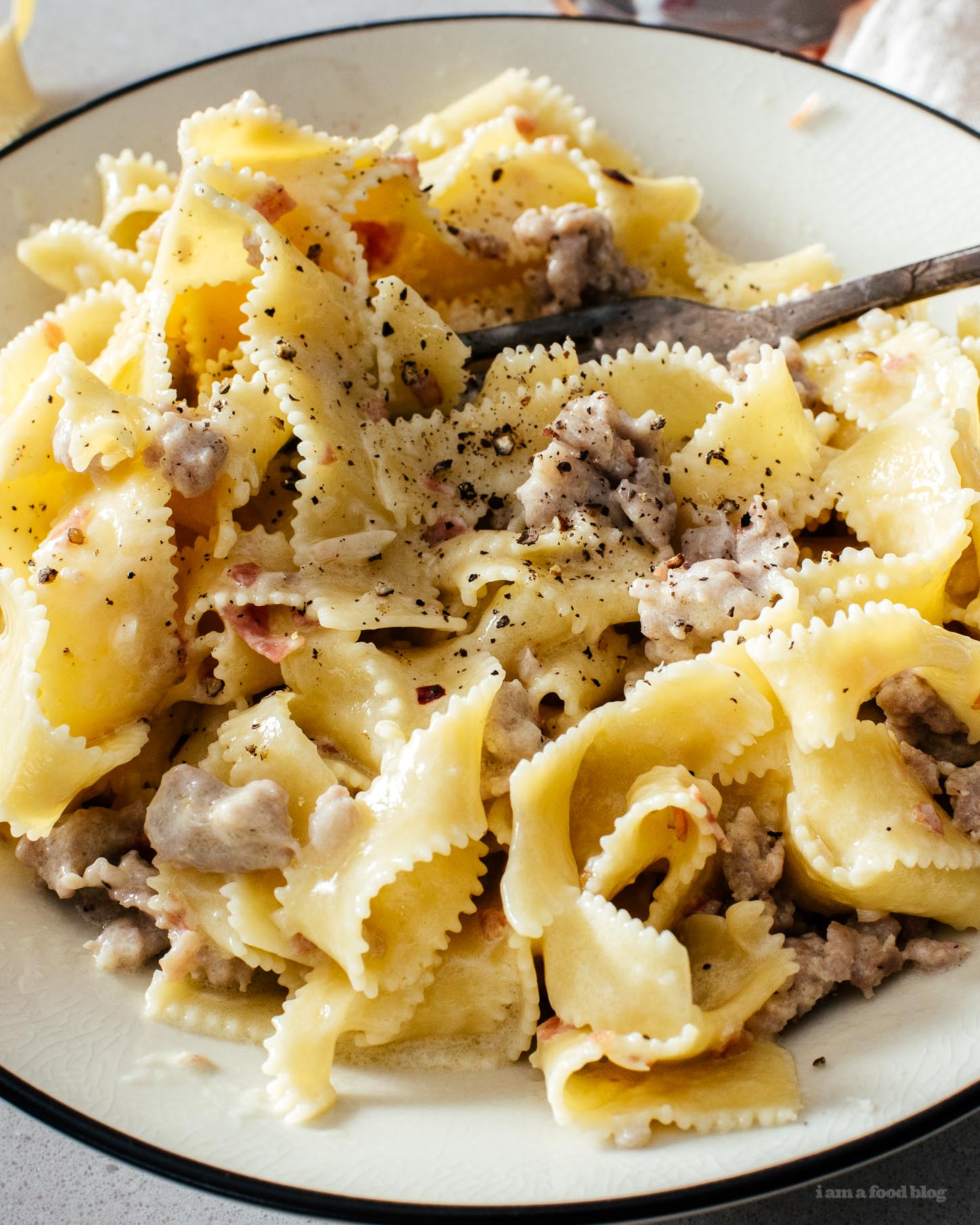 This pasta depends on the quality of its ingredients (what the Italians call materia prima) so try to get high quality ingredients, starting with a good local uncured sausage. Most cities have a local sausage maker, someone who makes a bunch of charcuterie. I went through a few different sausages, from grocery store to local artisan, before I found my perfect sausage.

One thing you should splurge on is good olive oil. It doesn’t need to be (and shouldn’t be) the most top shelf stuff, because heating oil destroys some of its delicate aromas, but try to get a mid-priced bottle from somewhere along the Mediterranean sea, ideally Italy.

As always, sauce pasta by transferring the pasta to the sauce over medium heat and tossing with soft tongs until the pasta is well coated and a rich creamy sauce has formed. 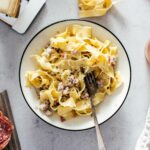 I used a local artisanal fennel sausage and a fennel salumi called finocchiona.

Five Ways to Follow the Coronavirus Outbreak for Any Metro Area in the U.S.

Former Bond Girl Has Some Thoughts About Why The Role Changed In The Daniel...