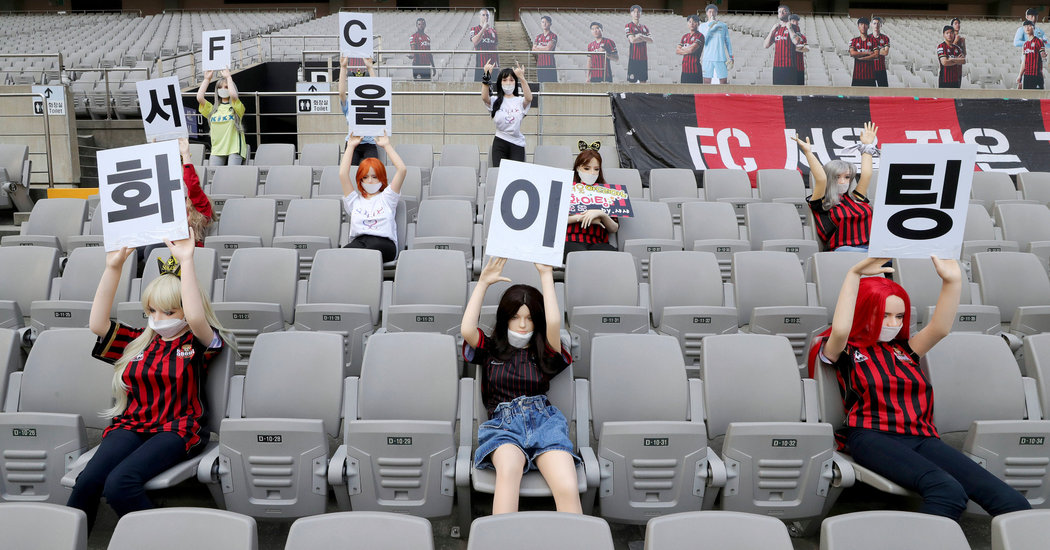 SEOUL, South Korea — As a handful of the world’s sports leagues inch back to life, they have sought ways to maintain a bit of the old pre-pandemic festivity in stadiums devoid of spectators.

One popular choice, from Germany’s top soccer league to professional baseball in Taiwan, has been to replace fans with figures that are not subject to social distancing rules: cardboard cutouts depicting hometown supporters holding signs or smiling.

Over the weekend, a soccer team in South Korea opted to fill seats with something a little more lifelike — to its deep embarrassment.

The club FC Seoul apologized on Monday after what it believed were ordinary mannequins — quickly recognized by many fans as sex dolls — were placed in the stands for a match against Gwangju FC.

Some on social media noted the telltale signs, like the business logos for sex toy marketers on the dolls’ clothing, or their strikingly buxom physiques. Of the roughly two dozen dolls in the stands, nearly all were women.

“We had tried to add some fun in the no-spectator match,” FC Seoul said in a statement. “But we have not checked all the details, and that is clearly our fault.”

The incident was a blemish for the K League, the top professional soccer league in South Korea. After a weekslong delay, it resumed play on May 8, as the country relaxes more restrictions imposed to fight the coronavirus.

It won global attention as one of the first major soccer leagues to retake the field. A dozen foreign broadcasters have bought rights for the season, eager to show games to fans starved for sports.

On Monday, though, the spotlight was an uneasy one. The Instagram page of FC Seoul was filled with messages from fans outraged that the club had failed to notice that the mannequins were “so obviously” sex dolls. Some derided the team’s management as clueless and lamented the global humiliation that had been brought on it.

The team said it had received assurances when the dolls were procured that they were just ordinary folk. “We had confirmed that although the mannequins were made to look just like real people, they had nothing to do with adult products,” it said.

But the club admitted that it did not do a background check on the supplier, which makes sex dolls. It also said it had failed to notice that the logos on the clothing were connected to the sex industry.

The Most Rewarding And Challenging Part Of Making The Lovebirds, According...

Best toaster for 2020: The finest ways to part-burn bread

Your 10k Run: 4 Tips for Your Fastest Race

Italy, Pandemic’s New Epicenter, Has Lessons for the World

Religious Groups in China Step Into the Coronavirus Crisis

U.N. Court’s Order on Rohingya Is Cheered, but Will Myanmar Comply?