In 2005, Professor Jeannette Haviland-Jones sent out three different types of packages—a candle, a fruit basket, or a floral bouquet—to 147 different women. It was a thank you gift, she said, a ruse that seemed plausible enough. The recipients had all participated in one of her recent psychological studies. But they weren’t actually gifts; they were variables. And the delivery men carrying them weren’t couriers, they were observers, measuring each recipient’s facial expressions. Afterwards, studying the results in her lab, Haviland-Jones discovered something that, she recalls, shocked her. Those who got the flowers unanimously exhibited a Duchenne smile—a genuine expression considered by psychologists to be ‘the sole indicator of true enjoyment.’ In fact, three days later, the flower group felt happier than their fruit-basket and candle brethren. ‘When I saw that every person who got the flowers responded with the Duchenne smile, I thought, No, this doesn’t happen,’ Haviland-Jones said. ‘In the emotions lab, you never get a 100 percent response unless you’re dropping a snake on people, which gives you a nice 100 percent fear response. But, happy? No.’

Empirically, Haviland-Jones proved what, anecdotally, many of us already knew: flowers have power.

Which is why, perhaps, during the COVID-19 pandemic, people are drawn to them more than ever. Google searches for ‘flower delivery’ doubled from March 2019 to March 2020, and Pinterest found searches for ‘flower boxes’ were up 408 percent year over year. Flowers aren’t essential, but they’re emotional: as society capsizes around us, we search for even the smallest slivers of joys. Beautiful blooms—with their colour, smell, and symmetry—provide the brief solace we desperately seek. 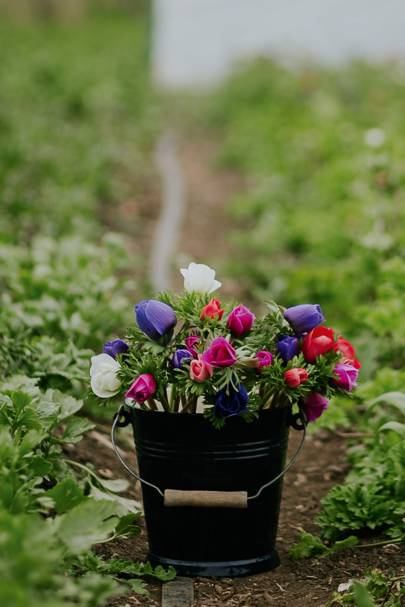 A bucketful of jewel-like anenome coronaria

In mid-April, a bin outside of Mount Sinai Hospital in New York City sat overflowing with cherry blossoms and lilacs. It was part of Lewis Miller’s ‘Flower Flash,’ a guerilla flower installation series that’s given the world-renowned florist a reputation as the Banksy of flowers. During the coronavirus pandemic, he has adorned receptacles throughout New York City. ‘People are starved for beauty, and flowers are nature’s biggest show-offs. They are mood elevators and stress relievers,’ says Miller. ‘Every New Yorker deserves to be bowled over by nature’s raw and unbridled beauty. And to do this for my beloved city in an unexpected way, serving no other purpose but to make people smile, is a great gift to me.’ Just like in Haviland-Jones’s study, it was a gift much appreciated. The artful arrangement became an Instagram sensation, cropping up on the feeds of cooped up New Yorkers everywhere, despite Miller not publicly sharing the location. On his account alone, which has 154,000 followers, it received over 19,000 likes. ‘Walked by one of these on the way to the hospital,’ one commenter wrote. ‘It brought me such much happiness. Thank you.’

In London, Phil John Perry is hard at work. ‘At the beginning of this pandemic I was beside myself with worry. Flowers and my career as an artist seemed futile. As my jobs dried up and my flowers went unused, I decided to photograph them and use my skills to digitally use the images for virtual floral headdresses for NHS workers,’ Perry says. (His fantastical creations also crowned Beyonce for her September 2018 US Vogue cover.) Flowers are symbols of courage, hard work, and beauty, which are the exact attributes that Perry sees in the NHS and key workers.

It’s a personal project for Perry: his mother is a respiratory specialist nurse. ‘My mum has always been my fashion inspiration. She’d pick me up from school wearing her nurses uniform and red lipstick—so chic and beautiful while doing such incredible work,’ he says. ‘Florals mark our most profound moments in life. This pandemic is a universal milestone in all our lives. Drenching it in meaningful blooms is necessary.’ 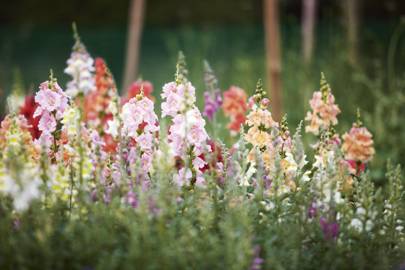 In Japan, photographer Yoshiyuki Okuyama finds flowers to be a symbol of life, love, and lost opportunity with his grandmother. ‘I loved my grandmother, who is always very gentle and calm. However, I didn’t have the chance to talk to her a lot,’ Okuyama reminisces. He regrets that: ‘When I think about it now, I should have gone to her house and should have talked with her. My atelier is the place where she used to live. When I look at the beautiful lights which come into the room in the late afternoon, I imagine that she must be lonely.’

His grandmother always put flowers in her room. Now, Okuyama does too. He’ll sit and face the blooms, armed with a camera. Then, he captures their simple, earthly essence, alongside the invisible ties between him and his ancestor. ‘The action of shooting flowers at the same place is an action of remembering her and talking to her,’ he explains. ‘To me, this whole thing is a conversation with my grandmother. I truly consider this a self portrait.’

Haviland-Jones’s data showed that flowers cause positive feelings, but they didn’t explain why. She and her team put forth their own hypothesis: perhaps it’s due to their universal symbolic meanings, or the sensory stimuli they provide. Perhaps our hunter-gatherer ancestors positively associated flowers with fruits. Their evolved existence as catalysts of human happiness, she argued, means something. ‘It supports the basic significance of emotion for survival,’ she wrote.

The days, now, can seem dark and endless, the future hard to imagine. Yet, as Henri Matisse once said, ‘there are always flowers for those who want to see them.’ They won’t solve your problems, or the world’s. But for a little while, they’ll make you smile (hopefully of the Duchenne variety). That’s something we all need.

From the archive: Ian Fleming on his Jamaican villa (1958)

A tour of Oak Spring, Bunny Mellon's garden in Virginia

Indie darling Alto’s Adventure and its sequel are finally coming to...

How to Name a Champion Without the Championship

Prince Charles and Camilla share an anniversary picture from their Scottish...

How to create a glorious Easter table