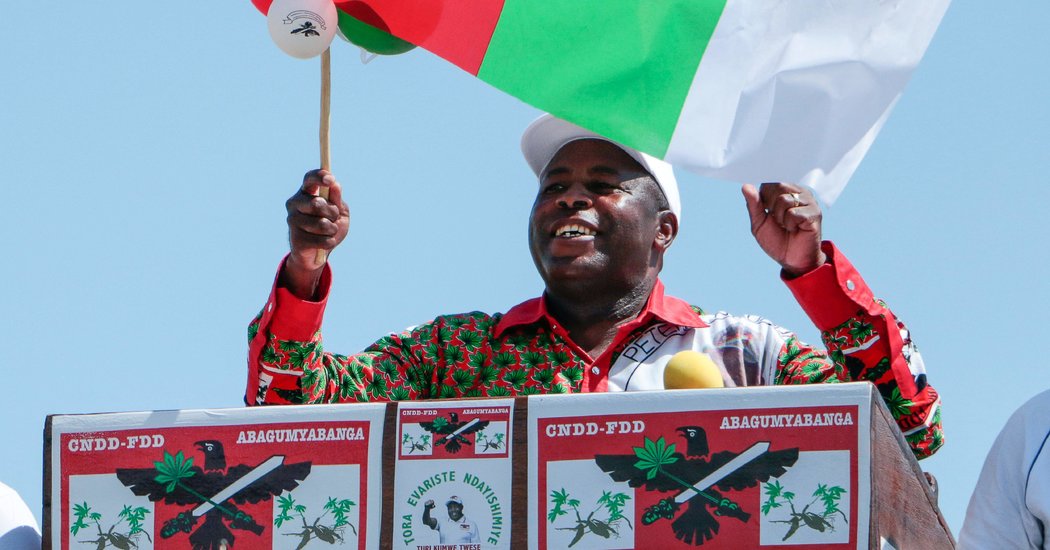 NAIROBI — Burundi’s ruling party candidate, a retired general, has won the presidential election, the country’s electoral commission said on Monday amid accusations of vote-rigging by the leading opposition challenger.

The commission chairman, Pierre Claver Kazihise, said the turnout was “massive” — it was put at 88 percent — and described the election as peaceful.

Mr. Rwasa has said he will take his complaints about the election to the constitutional court, although it is packed with allies of the current president, Pierre Nkurunziza, who supported Mr. Ndayishimiye.

Neither Mr. Rwasa nor Mr. Ndayishimiye were immediately available for comment. Their parties were also not available.

The vote to replace President Nkurunziza was held on May 20, and was preceded by political violence including the arrest, torture and murder of opposition activists, according to a local rights group.

There was also controversy over holding the election during the coronavirus crisis.

Five other candidates also campaigned in the elections, in which 5.11 million registered voters were eligible to participate.

Economic growth in Burundi is at a standstill and political violence is common. From January to March, Ligue Iteka, an exiled Burundian rights group, documented 67 killings, including 14 extrajudicial executions and six disappearances.

The government has denied accusations of rights violations.

Hundreds of Burundians were killed and hundreds of thousands fled into exile after unrest surrounding the last election in 2015, when the opposition accused Mr. Nkurunziza of violating a peace deal by running for a third term.

New Zealand's debt to soar to counter COVID-19. Europe's will too.

Facebook Provides an Update on Its Plans to Connect the World...

Tony Hawk's Pro Skater is back, as a from-the-ground-up remaster

Tens of Thousands Protest in Mali Amid Growing Opposition to Keita...

‘It’s Clear That the Pandemic Is Accelerating,’ W.H.O. Official Says