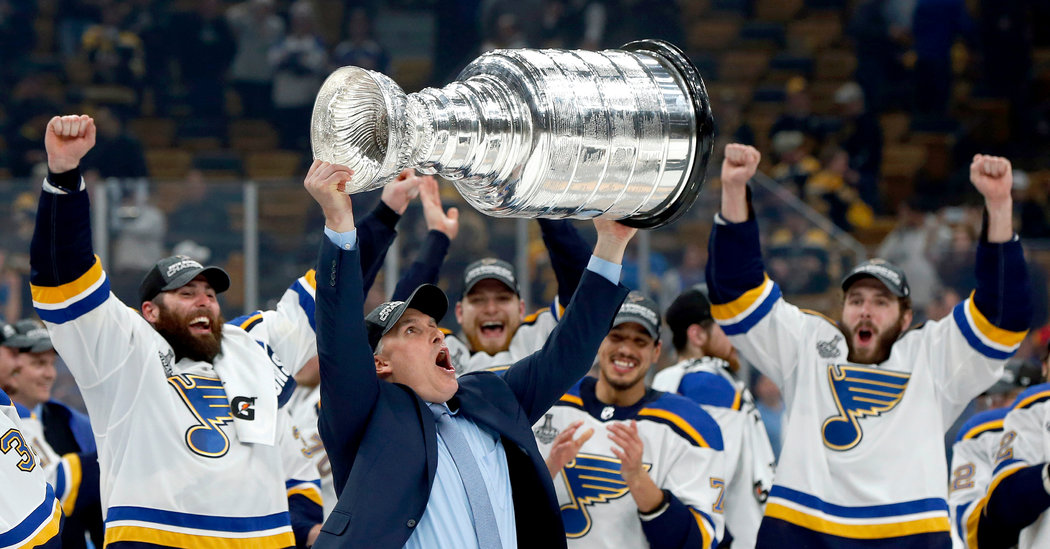 A game once played outdoors in subzero temperatures and wool sweaters may soon crown its champion during the swelter of summer.

On Monday, the National Hockey League sent a memo to players and members of the news media detailing a plan to resume its season with voluntary workouts as soon as early June after a layoff of more than two months.

The announcement came after a vote last week in which the executive board of the N.H.L.’s players association approved a proposal for a 24-team playoff, scrapping the dozen or so games remaining in each team’s regular season. Discussions are continuing between the league and union on how, and where, to resume play, which would almost certainly occur without fans in the arenas.

Even with the framework of the season’s finale taking shape, the plans underscored the concerns that hockey’s stakeholders are weighing to restart.

The league’s 22-page “Phased Return to Sport Protocol” would allow for a maximum of six players at a time to meet in a team’s practice facility, along with a small group of team personnel. On-ice workouts cannot include coaches or trainers, and players will have to wear face coverings elsewhere inside team facilities. Players and team personnel will be required to undergo testing in advance of returning to practice facilities or, if the local supply does not allow for widespread testing, to quarantine for 14 days before they can enter.

The league emphasized that these workouts would be voluntary — to allow for safety concerns and any immigration issues for players returning to the United States — and conducted only where local jurisdictions have relaxed restrictions to allow gatherings.

“We are continuing to monitor developments in each of the club’s markets, and may adjust the overall timing if appropriate, following discussion with all relevant parties,” the memo said.

The plan looks to be a starting point for vetting the logistics of the return to play. The competitive and financial stakes of the league’s return and the health risks associated with going back to normal, make any discussion complicated.

The players’ union vote on the playoff format came after considerable debate but received near unanimous approval, with 29 of 31 team representatives voting to continue discussions.

Under the format, the playoffs would expand from 16 teams to 24, with the top four teams in each conference earning byes. Those top four teams would compete in a round-robin tournament to determine seeding, while the other 16 teams competed in best-of-five series. N.H.L. Commissioner Gary Bettman has said that the games would be played without fans and with limited travel. Competition would be confined to two to four sites, the locations of which have yet to be determined.

The representatives for the Tampa Bay Lightning and the Carolina Hurricanes cast the only two votes against pursuing the proposal.

“You look at teams that had a 10 percent chance to make it, now they’re pretty much on a 50-50 playing field,” Jordan Martinook, the Hurricanes representative, said in a conference call on Monday.

Martinook said his team believed that the teams that were seeded fifth through eighth would face a disadvantage because they would have to play an additional five-game series under the new format.

“When you have to win four to win the Stanley Cup — I’m sure the Blues would tell you that it’s hard enough — now that you’re going to have to win five it’s obviously harder,” he said.

Alex Killorn, the Lightning’s player representative said Sunday in an interview with The Athletic that his teammates opposed the format because of competitive imbalance between the top seeds and everyone else.

Normally, a bye might be an advantage, allowing for more rest and preparation. But after not playing for two months, even top teams need as much time on the ice in high-stakes environments as possible, he said. And he is not comfortable with more teams in the playoff than would normally qualify.

Still, he said, “there’s not going to be any way to do this that satisfies everyone. We’re just going to try to be as fair as possible. Whatever it is, we’re going to have to find a way to play with it.”

As with other major professional leagues managing a return to play, getting Covid-19, the disease caused by the coronavirus, remains a big risk in many areas. Five players on the Ottawa Senators and three of the Colorado Avalanche’s players tested positive for Covid-19 in late March.

The league said it consulted with Dr. Bruce Farber, an infectious disease specialist in New York, and other health professionals to shape guidelines that could include drastic changes to the game itself, ranging from mandating players wear full-face shields in games to prohibiting fights.

Georges Laraque, a former enforcer who contracted and recovered from Covid-19, said that while he understood the financial motivation to return to play — estimates vary, but all place lost earnings from a canceled playoff north of $1 billion — he felt that the risks were too great to return this season.

“This year, the guys are not playing for the Stanley Cup, they’re playing not to lose $1.5 billion next year,” Laraque said. “Whoever’s going to win the Cup this year, there’s going to be an asterisk marked on it. It’s a joke.”

Which is the best media streamer for you? Fire TV vs...

The Healing Power of Baseball

Conor McGregor and U.F.C. Attempt a Shift Away from Heel Status