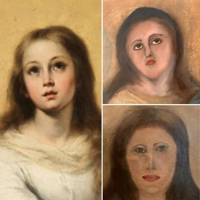 When restorers set about to work on Bartolomé Esteban Murillo’s The Immaculate Conception of Los Venerables – a baroque portrait of the Virgin Mary – they likely didn’t expect to create an internet sensation. However, the botched job has caused much hilarity across social media and the Royal Academy was quick to jump aboard. Using their hashtag #RADailyDoodle, they called on followers to do their own restoration on the painting, and the results were quite spectacular.

In order to see this embed, you must give consent to Social Media cookies. Open my cookie preferences.

For today’s #RAdailydoodle, who can do a better job at restoring this copy of baroque artist Bartolomé Esteban Murillo’s ‘The Immaculate Conception of Los Venerables’?

(you can also start from scratch) pic.twitter.com/TXphAJr4JG

Twitter users responded with all sorts of parody options, some adding the famous scene from Mr Bean: The Movie where a similarly bad restoration at the hands of the clumsy titular character occurs, while others were downright terrifying: case in point being Donald Trump’s face superimposed on the girl. From the surreal – a squirrel’s head – to the ridiculous via many emojis, the resulting thread is a joy to scroll through. Face masks, modern make up, a new smile and celebrity faces all make an appearance and we cannot stop looking at them. Sad as it is that an artwork had to be ruined for this to happen, it’s light relief from some of the other news making the rounds. Some of our favourites are below.

Before and after: artist Fee Greening’s transformation of an old shop in to a home

Where to spend and where to save: a room-by-room guide

A country house in Norfolk that exudes comfortable charm

In North Korea, Coronavirus Hurts Like No Sanctions Could

What To Watch On Netflix If You Love Violence In Your...

No Time To Die Will Reportedly Be The Longest James Bond...

Why Bernard Leach was the father of British studio pottery

Inside the Sussex studio of furniture maker Rory Stride