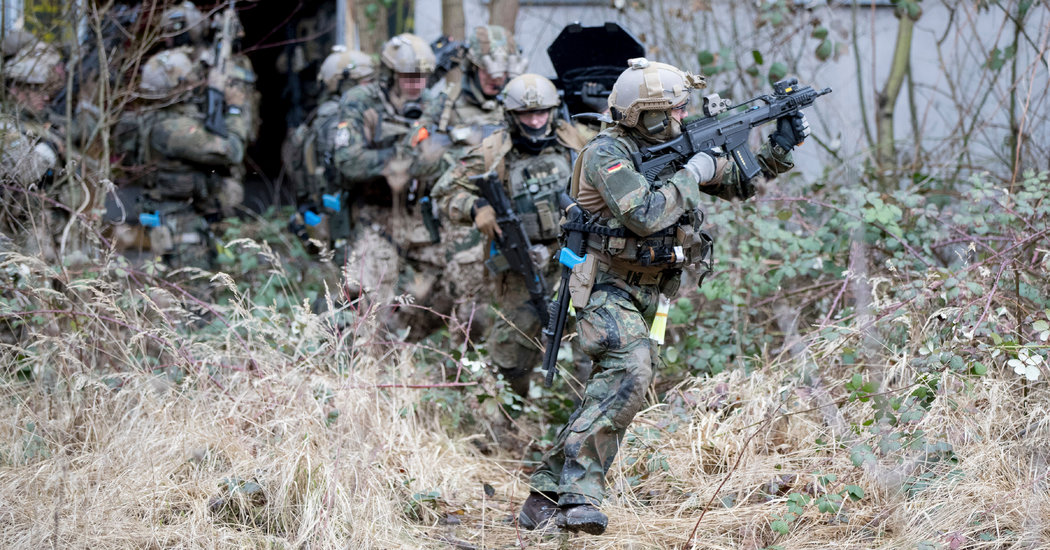 BERLIN — Germany’s defense minister announced Wednesday that she would partially disband the country’s special forces, the most elite and highly trained in the country, in the clearest signal yet of just how concerned the government has become about the spread of far-right extremism inside its own institutions.

The defense minister, Annegret Kramp-Karrenbauer, said one of four fighting companies inside the special forces had become so infested with far-right extremism that it would be dissolved. The rest of the special forces unit, known by its German acronym, KSK, has until the end of October to overhaul its recruitment, training and leadership practices before being allowed to rejoin any international military exercises or missions.

“The KSK cannot continue in its current form,” Ms. Kramp-Karrenbauer told a news conference, describing “an unhealthy elitism” and “toxic leadership” inside the unit, which, she added, had “developed and promoted extremist tendencies.”

The announcement came six weeks after investigators discovered a trove of Nazi memorabilia and an extensive arsenal of stolen ammunition and explosives on the property of a sergeant major who had served in the KSK since 2001.

His company is at the center of a long-running controversy over a notorious party three years ago, where soldiers were reported to have flashed Hitler salutes and listened to neo-Nazi rock music.

The raid highlighted “a new quality” of far-right extremism among those trained and armed to protect Germany’s democracy, Ms. Kramp-Karrenbauer said. Since then, military leaders and politicians have rolled out a flurry of initiatives, which critics said were long overdue.

A committee was formed to report back on far-right extremism in the special forces and to propose measures to combat it. New legislation was passed to make it easier to fire far-right soldiers. And, crucially, the KSK and the rest of the military has been ordered to account for missing weapons and ammunition.

Some 48,000 rounds of ammunition and 62 kilograms worth of explosives have gone missing from the special forces, said Gen. Eberhard Zorn, inspector general of the armed forces and co-author of the report on the special forces that was presented on Wednesday. The missing weapons and ammunition have added to concerns that the recent raid was only the tip of the iceberg.

The explosives in question were used by the KSK to explode building facades on special missions abroad, General Zorn said. “This is no small thing,” he added. “It worries me very much.”

It worries others, too.

“Do we have terrorist cells inside our military? I never thought I would ask that question, but we have to,” said Patrick Sensburg, a conservative lawmaker on the intelligence oversight committee and president of the reservist association.

The commander of the KSK, Gen. Markus Kreitmayr, wrote a three-page letter to his troops after the recent raid, in which he addressed far-right soldiers directly: “You don’t deserve our camaraderie!” he wrote, urging them to leave the unit on their own. “If you don’t, you will realize that we will find you and get rid of you!”

Ms. Kramp-Karrenbauer said efforts would now be intensified to determine whether recent and older cases of extremism were part of a network.

“The probability that it’s not just isolated cases but that there are connections is obvious and has to be fully investigated,” Ms. Kramp-Karrenbauer said.

Ms. Kramp-Karrenbauer added that she now wants to better integrate the KSK into the wider military to increase oversight of the unit. Training that had been conducted separately from other units would be opened up, security checks of new recruits would be intensified and the number of years soldiers could serve in the same company would be capped.

The report presented to the minister by General Zorn concluded that parts of the KSK existed outside the military chain of command. “The KSK, at least in some areas, has become independent in recent years, under the influence of an unhealthy understanding of elitism by individual leaders.”

But the failings were not just inside the KSK, the minister said. Across the military, ammunition and explosives have been allowed to go missing.

Christoph Gramm, the president of military counterintelligence, said his agency was currently investigating 600 soldiers, 20 of them in the KSK alone, which has about 1,400 members.

“Elite units such as these have cultural factors that may develop into susceptibilities,” Mr. Gramm recently told The New York Times. “For example if there is a misguided sense of tolerance.”

“The soldiers have an elitist self-confidence,” he added. “They have special capabilities and skills and a well-developed sense of loyalty. Such a mind-set can involve risks.”

Ms. Kramp-Karrenbauer, the defense minister, said the military counterintelligence service, known as the MAD, had failed in its mission to monitor and detect extremism in recent years.

“The work of the MAD was not satisfactory,” she said, adding, “and it’s still not enough.”

The KSK turns 25 next year. Many hope that it will have rooted out its far-right extremists by then. “The KSK needs to be our elite for freedom and democracy,” said Eva Högl, the parliamentary commissioner for the armed forces.

But for that to happen, Ms. Högl said, the authorities have to live up to their recent vows to shine a light in all corners of Germany’s institutions.

Such vows have been made before.

In the early 2000s, members of the National Socialist Underground, a neo-Nazi terrorist group, killed nine immigrants and a police officer over seven years. One of the killers was a former soldier. Paid informants in the domestic intelligence agency helped to hide the group’s leaders and to build its network. When the case finally came to trial, it emerged that key files had been shredded by the agency.

Ms. Högl was a member of the parliamentary inquiry into what became known as the N.S.U. scandal. “Two decades later we still don’t know what the authorities knew,” she said. “This time has got to be different.”

Parents, Students and Teachers Give Britain a Failing Grade Over Exam Results

Sports Have Been on Pause. It’s Time for a Reboot.

How a team of NASA engineers developed a ventilator for COVID-19...

Jetliner With 99 Aboard Crashes Into Crowded Pakistani Neighborhood

Facebook Will Now Enable Users to Broadcast their Messenger Rooms via...

J.K. Rowling Begins Publishing ‘The Ickabog,’ for Children in Lockdown

In the Coronavirus Fight in Scandinavia, Sweden Stands Apart