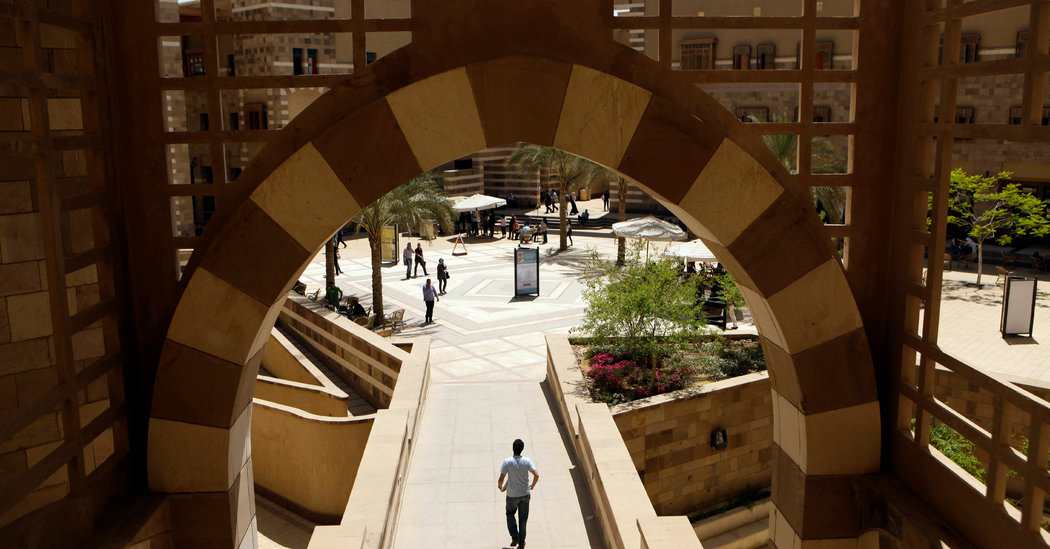 A flood of accusations against a 21-year-old Egyptian university student who attended some of the country’s most exclusive schools poured out on social media in the past week after dozens of women posted detailed allegations of sexual harassment and assault.

Within days, an Instagram page set up to expose him identified 93 credible accusers, some as young as 13, the campaign organizers said. Several of the accusers were fellow students at the American University in Cairo, a prestigious institution favored by children from some of Egypt’s wealthiest and most powerful families.

On Saturday, three days after the Instagram page went up, the Cairo police arrested the student, Ahmed Bassam Zaki, at his home in an upmarket suburb.

The swift and public action was a remarkable turn for Egypt, where sexual harassment and assault are woefully common and victims are afraid to speak out for fear they themselves could be blamed.

With its mix of wealthy families, expensive schools and shocking accusations, the case has made headline news in Egypt and become the hot topic of talk shows and social media. And its brand of social media activism has generated the seeds of a national reckoning, another Egyptian #MeToo moment.

By Tuesday, the state-run National Council for Women said it had received over 400 complaints involving various forms of violence against women since the furor erupted. The news media, which is heavily influenced by the government, has been largely supportive of Mr. Zaki’s accusers.

Scholars at Al Azhar, the ancient center of Sunni Islamic scholarship, took their side too, issuing a statement encouraging women to testify about sexual assault and rejecting any suggestion that their dress or behavior was to blame.

“It’s a message to the community that we need to change our culture,” said Ahmed Barakat, a spokesman for Al Azhar. “In Eastern culture, some victims are afraid to speak out because they feel shame. We need to push them forward.”

Egypt gained notoriety for sexual violence after high-profile attacks in 2011, when post-Arab Spring protests were marred by assaults on women in Tahrir Square, and 2014, when a woman was gang-raped in public after celebrations for the inauguration of Abdel Fattah el-Sisi as president. In January, outrage erupted over a viral video that showed a mob swarming a screaming woman in Mansura, north of Cairo.

Sexual harassment is so widespread that a 2013 United Nations study found that nearly all Egyptian women — 99 percent of those surveyed — had been victims of it.

The action against Mr. Zaki was all the more startling because it was led by a government better known for jailing women it accuses of immoral or insolent behavior, an indication of how far Egypt still has to go.

“This is another step in a movement that has been building for years,” said Mozn Hassan, one of Egypt’s most outspoken feminists. “I’m so proud of it.”

But she acknowledged that Egypt lags behind many countries in protecting the rights of women. Although sexual harassment was criminalized in 2014, rape convictions are still notoriously difficult to obtain, she said.

The government has recently jailed women on what rights groups call spurious charges, including the editor of an independent news website, a famous belly dancer, a translator at the renowned Bibliotheca Alexandrina and a woman from a prominent family of activists. Since April, seven young Egyptian women have been imprisoned for posting innocuous dance videos to the social media platform TikTok that prosecutors say offend public morals.

The criminal case against Mr. Zaki centers on accusations of rape, blackmail and indecent assault by six women, according to the prosecutor general.

Mr. Zaki also faces potential prosecution in Spain, where a business school in Barcelona that he enrolled in last year announced that it had expelled him and, on Monday, filed a criminal complaint with the Spanish police.

Mr. Zaki has not publicly addressed the accusations but the prosecutor-general said Monday that he had denied most of them. A prominent television host who said he had spoken with Mr. Zaki’s father, a telecommunications executive, also said that Mr. Zaki rejected the allegations.

The wave of outrage against Mr. Zaki was invigorated by his status as a member of Egypt’s elite.

After graduating from the American International School, one of the most expensive high schools in Cairo, he attended the American University in Cairo starting in 2016, where fellow students say that he quickly gained a reputation for bad behavior toward women.

As a freshman, he was pushed out of the college salsa club after numerous women complained of harassment, said Kareem Elhosseni, who was then vice president of the club.

According to several accounts posted in the past week, Mr. Zaki used numerous ruses to gain women’s phone numbers, sometimes claiming to belong to social clubs that did not exist. He pressured women to provide intimate photos that he later used to coerce them into sex, threatening to send the images to their parents if the women refused.

Or he “attracted their sympathy by claiming he was going through a crisis,” the prosecutor said, then lured them to his home in a gated community where he sexually assaulted them.

One accuser, an 18-year-old woman he met on Tinder, said he seemed like “a decent guy.” But the conversation quickly turned to demands that she come to his house to perform sex acts. When she refused, he showered her with insults and threatened to go to her parents.

“When you take it out of context, he sounds delusional,” she said. “But in the moment you believe it. That’s what’s scary.”

“None of these women knew each other, but their stories had a lot of similarities,” said Sabah Khodir, an Egyptian writer based in the United States who has written about sexual abuse and who received testimony from several women about Mr. Zaki.

But the extent of the accusations only became evident after the Instagram page, @assaultpolice, went public on July 1, eliciting dozens of new accounts, many of them backed by copies of voice and text messages sent by Mr. Zaki. Four of the accusers were European students and one was an American.

The page’s administrator, who comes from the same social circle as Mr. Zaki and is roughly his age, said she had confidence in the accounts she posted because she knows the families of many of those making the accusations.

She spoke on the condition of anonymity because she feared legal action by Mr. Zaki’s family.

The New York Times was unable to independently verify any of the accusations.

Mr. Zaki dropped out of the American university, enrolling in an online program at the EU Business School in Barcelona last year. He moved there in February to take a semester on campus.

On Friday, the school expelled him, said Claire Basterfield, a spokeswoman for the business school.

On Monday, its lawyers filed a 54-page criminal complaint with the Spanish police based on accusations from some of Mr. Zaki’s fellow students in Spain.

“It’s important to protect our students,” Ms. Basterfield said. “We need the police to investigate.”

The quick action by the Spanish school has drawn scrutiny of the response of the American University to similar complaints about Mr. Zaki.

Ms. Khodir, the Egyptian writer, said that there had been numerous accusations about Mr. Zaki from fellow students during his time at the university, culminating in a formal sexual harassment complaint in 2018.

A spokeswoman for the American University, Rehab Saad, declined to discuss the complaint against Mr. Zaki, citing confidentiality concerns, saying only that he left the university in 2018 without completing his degree.

Ms. Saad added that the university has “a zero-tolerance policy against sexual harassment” and that it “strictly complies with Egyptian law on gender harassment, as in all matters.”

In an email to staff on Tuesday, the university’s president, Francis J. Ricciardone, pledged to “redouble our training and communications programs” on anti-harassment measures.

Egypt has had other “Me Too” moments, though their effects have been ephemeral.

In June 2019, several women accused Amr Warda, a national soccer player, of sexual harassment, leading to his suspension from the squad. But he was reinstated after two days, reportedly after pressure from other players. The furor intensified when Mohammed Salah, Egypt’s revered soccer star, said Mr. Warda should be given a second chance and not “sent to the guillotine.”

Last November, prosecutors dropped all charges against a 15-year-old girl, Amira Ahmed, who had confessed to killing a bus driver as he attempted to rape her at knife-point. The case was considered a victory for a woman’s right to self-defense, and helped change the public perception of violence against women.

Still, the intense focus on Mr. Zaki, who has been remanded in custody until July 21, has opened a new front in the fight for women’s rights, albeit one that is overlaid with complex social divisions.

Some Egyptian commentators have contrasted the lionization of Mr. Zaki’s accusers with the treatment of the seven women jailed for posting TikTok videos.

While those accusing Mr. Zaki come from wealthy and often influential families, the TikTok women are largely from working or middle-class backgrounds where conservative gender codes are strictly enforced.

“It’s about framing,” said Ms. Hassan, the activist. “The authorities want to send a signal that there are good women and bad women. They support the good ones if they are victims. But these TikTok women — they are bad.”

Mapping the Damage From the Beirut Explosions

From the Strategist: The best running hydration packs and water bottles

Palestinians in Jordan Valley Fear Annexation Would Choke Off Their Villages

Israel Faces a Defining Question: How Much Democracy Should Arabs Get?