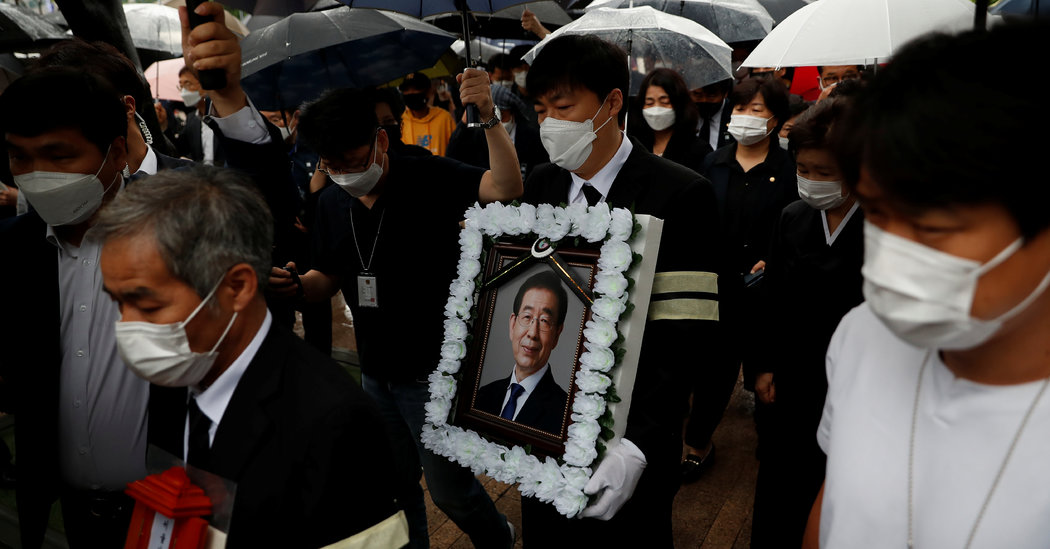 SEOUL, South Korea — Seoul City Hall officials said on Wednesday that they would create a joint fact-finding team with women’s groups and legal and human rights experts to investigate accusations that Mayor Park Won-soon had sexually abused a secretary for four years.

The team’s members ​will ​have no power to subpoena or indict those they want to ​question because Mr. Park, 64, killed himself on Thursday, a day after the secretary filed a complaint against him to the police. By law, the criminal case against Mr. Park was automatically closed upon his death.

But women’s rights activists, as well as the unidentified secretary, who spoke to the news media through her lawyer, have called for an investigation even if prosecutors cannot bring charges against Mr. Park.

In a survey conducted ​by Realmeter a ​day after Mr. Park’s funeral on Monday, more than 64 percent of respondents said they considered an investigation necessary, the company said on Wednesday.

“The most important thing is to find the truth,” said Hwang In-sik, a spokesman for the city of Seoul, during a news conference on Wednesday, where he announced the fact-finding investigation.

But Mr. Hwang indicated that the investigators might be able to ask City Hall for disciplinary actions or even ​request that ​the police begin a formal investigation if they find enough incriminating evidence against any ​City Hall ​officials other than Mr. Park.

Besides the secretary’s allegations​ of sexual harassment​, the investigators will look into when and through whom Mr. Park first learned of his secretary’s complaint to the police. Women’s rights activists have said that the filing was leaked to Mr. Park, giving him an opportunity to potentially destroy evidence before he died by suicide.

They also said that the secretary’s initial appeals to city officials for help had been ignored as officials tried to protect Mr. Park’s reputation. ​

“I am so crushed that I can hardly find a word to say to the people,” Lee Hae-chan, the head of the Democratic Party, said on Wednesday about the accusations against the late mayor. “I once again say we are sorry to the people.”

The suicide of Mr. Park, as well as the accusations against him, have dominated news headlines in South Korea for several days. As mayor of Seoul, a city of 10 million, Mr. Park was South Korea’s second-most-powerful elected official, credited with making the city safer and more friendly toward women and often ​cited as a possible presidential candidate​. ​

Before becoming mayor, ​Mr. Park had been one of the country’s most prominent human rights lawyer​s​, ​championing women’s rights throughout his career​ and winning the country’s first sexual harassment case.

The accusations against Mr. Park were also a blow to ​President Moon Jae-in’s governing liberal Democratic Party​, of which Mr. Park had been a member. Two other party members have​ recently​ become the focus of the #MeToo movement.

In April, Oh Keo-don, the mayor of Busan, South Korea’s second-largest city, admitted to sexual misconduct and resigned after a public servant accused him of sexually assaulting her in his office.

In 2018, Ahn Hee-jung, a rising star in Mr. Moon’s party and a presidential hopeful, stepped down as governor of South Chungcheong Province after his secretary went on television to accuse him of repeatedly sexually assaulting her. He was sentenced to three and a half years in prison on rape charges.

Ang Rita, Who Conquered Everest Again and Again, Dies at 72

Babar Qadri, Champion for Kashmir, Is Killed as Violence Mounts

For N.H.L.’s Oldest Players, the Clock Ticks Louder Every Day

After Recovery From the Coronavirus, Most People Carry Antibodies

Andrés Iniesta Plots a Return to Barcelona, Where the Beauty Is...

How to setup an Amazon Kindle for children: Amazon Kids and...

Unprepared for the Worst: World’s Most Vulnerable Brace for Virus