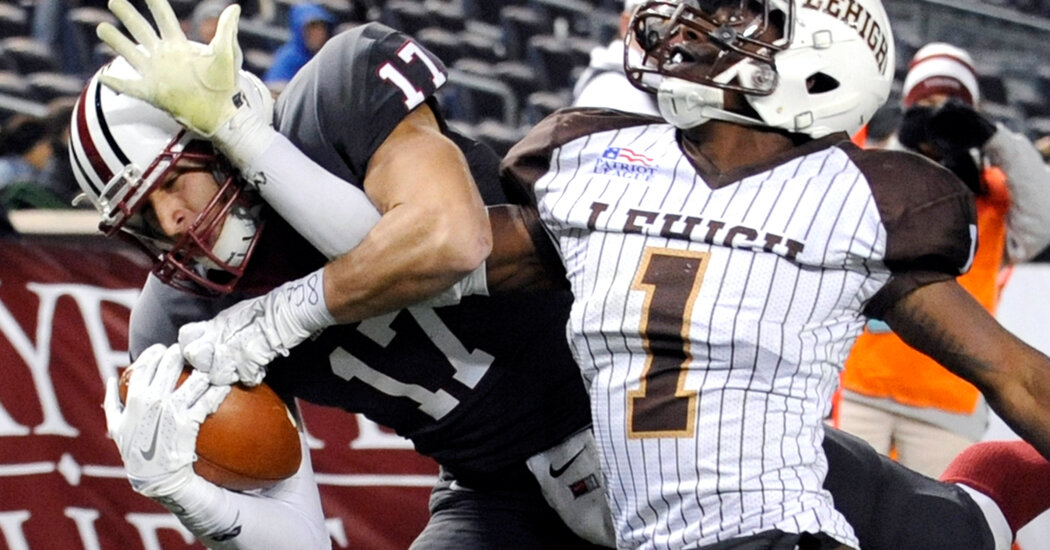 The N.C.A.A. on Thursday updated its guidelines for bringing back college sports this fall, and they included universal masking on all sidelines, daily coronavirus symptom checks and social distancing on and off the field.

But if there are going to be sports this fall, the pandemic has to be more under control. And it’s not looking good right now.

“Today, sadly, the data point in the wrong direction,” Mark Emmert, the president of the N.C.A.A., said in a statement. “If there is to be college sports in the fall, we need to get a much better handle on the pandemic.”

The organization’s third iteration of recommendations notes that previous guidelines were written while the spread of Covid-19, the disease caused by the coronavirus, was trending downward. The coronavirus outbreak has surged in states that relaxed stay-at-home advisories in recent weeks, especially in the South and the West. More than 3.5 million people in the United States have been infected; at least 138,000 Americans have died.

The report states that athletes and team personnel should engage in daily health check-ins and contact team health representatives virtually or via telephone if they have symptoms before entering athletic facilities or campuses. It also urges a universal protocol for staff, coaches and athletes to wear cloth face masks — or face shields, at the very least — while participating in nonaquatic activities.

“Even where state and local requirements may permit otherwise, schools should consider the recognizable benefit of requiring face coverings and appropriate physical distancing wherever possible in the college athletics environment,” it reads.

And while the health of the athletes is a top priority, the report cites major concern, given that college athletes skew younger and healthier, around the asymptomatic spread of the virus — a consideration that also fed into decisions regarding the suspension of fall sports for the Mid-Eastern Athletic Conference.

“Even if we didn’t have a student-athlete positive, we would have made this decision,” said Wayne A.I. Frederick, the president of Howard University and chair of the council of chief executives for the M.E.A.C. “Most athletes are young, healthy people, but the bigger risk is for the population around them.”

The M.E.A.C., which is made up of 11 historically Black colleges, is the third Division I conference to suspend sports this fall, after the Patriot and Ivy Leagues.

Other leagues have announced plans to play conference-only schedules: The Big East announced on Thursday that its schools would exclusively play in conference for men’s and women’s soccer, men’s and women’s cross-country, volleyball and field hockey, following in the footsteps of the Big Ten and the Pac-12.

The Power Five conferences have largely weighed in: The Atlantic Coast Conference won’t hold any Olympic sports until after Sept. 1. The Southeastern Conference has not announced plans regarding football, noting that its decisions would be made in late July, but it will postpone the start of volleyball, soccer and cross-country competition until at least Aug. 31. The Big 12 commissioner, Bob Bowlsby, said it was too early to make a call.

Regardless of whether games will occur in or outside the conference, the N.C.A.A. protocols call for participants in “high contact” sports to be tested for the virus within 72 hours of competition. Those sports include basketball, field hockey, football, ice hockey, lacrosse, rowing, rugby, soccer, squash, volleyball, water polo and wrestling.

Still, the N.C.A.A. guidelines as well as conference decisions are contingent on public health advisories, and they recommend that schools refer to their local officials for additional guidance.

“Any recommendation on a pathway toward a safe return to sport will depend on the national trajectory of Covid-19 spread,” said Brian Hainline, the N.C.A.A.’s chief medical officer.

The Vaccine Challenge: ‘Not Putting All Our Eggs in One Basket’

Here’s your best look yet at ZTE’s first smartphone with an...

Why Twitter labeling Trump’s tweets as “potentially misleading” is a big...