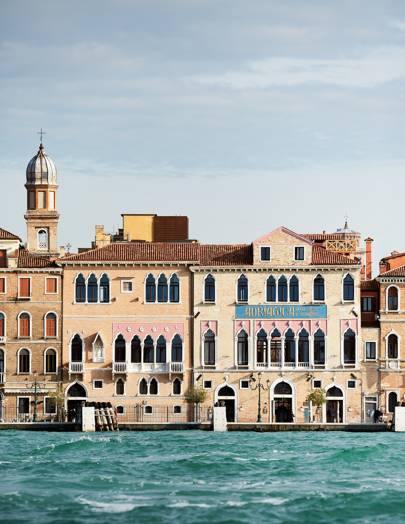 Venice is a place of great romance, intrigue and beauty. A mesmerising magic weaves its way through the meandering backstreets, bridges and canals – the improbability of the way the city seems to float on an ancient web of preserved timber, with its ornate, regal Venetian Gothic architecture dating as far back as the 13th century.

But, oh my, the crowds. Almost 30 million visitors at the last count, pouring onto the islands every year, feeding the pigeons in St Mark’s Square and jamming up the 400-year-old Rialto Bridge with their selfie sticks. Thankfully there is respite from the hordes in Dorsoduro, one of the island’s oldest – and quietest – neighbourhoods where, just a short walk from the Galleria dell’Accademia and the Peggy Guggenheim Collection, you will find the Experimental Group’s newest hotel, Il Palazzo Experimental. Here, the Parisian team of four – Pierre-Charles Cros, Olivier Bon, Romée de Goriainoff and Xavier Padovani –have saved the former headquarters of the old Venetian shipping company Adriatica by transforming it into a thriving 32-room hotel, restaurant and cocktail bar, with the help of interior designer Dorothée Meilichzon.

A House & Garden guide to Venice

With the building’s huge volumes of space – created by high ceilings, generous room proportions, a magnificent ‘piano nobile’ hallway that affords dramatic views of water and sky, framed through Gothic-shaped windows, and an incredible hidden garden – ‘we had the opportunity to do something new, using typical Venetian savoir faire in the design, without creating a cliché,’ explains Dorothée, who has worked with the boys since designing the Prescription Cocktail Club in 2009 on the Left Bank in Paris.

Il Palazzo Experimental is unlike anything Venice has ever seen. While many of the five-star luxury hotels lining the Grand Canal have rested on the faded glamour of their laurels for far too long, this new hotel, which opened last autumn, is simply really good fun (and affordable, too) in one of the best locations on the island. ‘We do a huge amount of research before starting any project and although I knew Venice well, I wanted to go back to the history of its architecture,’ says Dorothée, who has drawn ideas for shapes and finishes from the city’s most influential architects – including the 16th-century Andrea Palladio and 20th-century concrete maestro Carlo Scarpa – and the city’s time-honoured traditions in marmorino plasterwork, glass blowing and wood turning.

To lend the interiors a more modern edge, she has added elongated curves (inspired by the arches of Venetian doorframes and windows), swathes of Breccia Capraia marble, banquette backs following the same curves as the seat in a gondola, and a layering of stripes on stripes, mimicking the iconic pali da casada marker poles iconic to the city’s landscape, painted around door surrounds, etched into wall panelling and upholstered on cushions, headboards and chairs. ‘I think we found all the possible ways of using stripes,’ Dorothée says with a laugh.

A patchwork of typically Venetian battuto and tessera terrazzo floors, from the reception area to bedrooms and bathrooms – the former like large tranches of jewel-dotted nougat, the latter borrowed from Scarpa’s late-Fifties design for the Olivetti store on St Mark’s Square – mingle with a rich colour palette influenced by the ever-changing shades of the lagoon – from luminescent turquoise to deep sea green – and the traditional pink, red, yellow and orange stucco façades of the local houses.

In the Dorsoduro Suite in the former attic, Dorothée has restored the exposed beams, from which Adriatica’s archival ship drawings were once suspended. In the evening, a small rooftop balcony is the perfect spot for some traditional cicchetti – bombetta fritta with bottarga and burrata or parmigiano croquettes laced with lime – and an ‘Arcipelago’ cocktail, the head bartender Marta Barbaglia’s melon and prosecco spritz with an unexpected sumac salt twist.

While for some Venice is a once-in-a-lifetime adventure, the guests flocking to Il Palazzo Experimental are as likely to be those coming regularly for the annual film festival and famous art and architecture biennales, as they are to be locals. The sunny promenade outside the hotel, running along the Giudecca Canal, is a favoured spot for strolling Venetians. ‘The city has a fantastic past, but it also has a fantastic future with all these manifestations of art and design,’ says Pierre-Charles. ‘Venice is the best backdrop for that.’

Both tourists and locals are also likely to come for the fresh, seasonal food on offer at Il Palazzo Experimental. The Ristorante Adriatica has been masterminded by Silvio Pezzana and Toto Dell’Aringa, co-founders of the Italian Supper Club in east London, both of whom have ties to the region, serving dishes inspired by the recipes of their grandmothers. With ingredients sourced locally (fresh ricotta from Veneto, clams from the lagoon, and fresh pasta made with rich farm eggs), there are also flavours from all along the Adriatic Coast – a homage to the building’s origins – including sweet, raw gamberi viola Puglian prawns, and slow-roasted leg of lamb with creamed carrot and dand-elion, a dish inspired by the cuisine of Abruzzo.

A brief history of the Venice Biennale

Next door, there is the Experimental Cocktail Club’s jewel-box of a bar – the group’s third outside London and Paris – designed by rising star of Italian design Cristina Celestino. This has Scarpa-inspired details and mischievous quirks such as tables that reference cufflinks and pendant lights reminiscent of pearl earrings.

Creating egalitarian, sociable places is what the Experimental Group does best. Inspired by the speakeasy cocktail bars the boys had seen while travelling through the US after university, they founded the first Experimental Cocktail Club in the Montorgueil neighbourhood of Paris in 2007. ‘We like the idea of fun restaurants and bars where you can go by yourself or with friends,’ says Pierre-Charles.

They now have 13 bars and restaurants, and six hotels, across Paris, New York, London, Ibiza, Venice and Verbier, plus their recently opened 43-room hotel in Menorca, based around a restored 19th-century finca with its own organic farm. But especially with Il Palazzo Experimental, the boys want to push the idea of affordable luxury, where ‘you get an incredible experience but trimmed of all the five-star fuss,’ says Pierre-Charles. ‘We hope to surprise guests on the one hand and comfort them on the other. When you have the right mix of both, people leave with a smile on their face’.

Bid on garden tours with top designers in the H&G summer auction, in aid of Maggie’s

These remote, luxurious cabins and pods are the new dream destinations

That Time Harrison Ford Was Once 'Almost Killed' By A Star...

Erdogan Faces His Biggest Test of the Pandemic: The Economy

Marie Antoinette’s private garden at Versailles is being restored

What to buy for your house in July