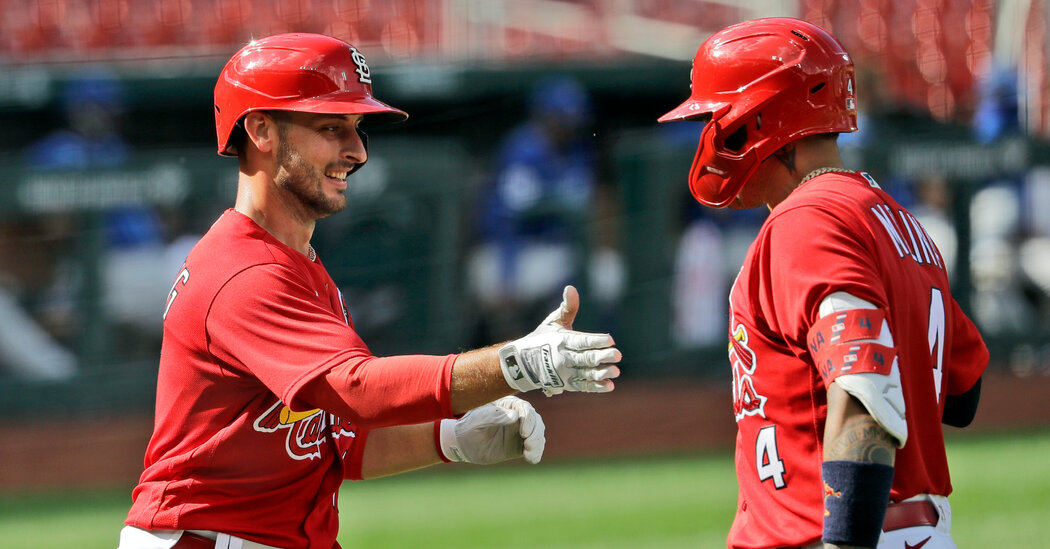 ST. LOUIS — The three-game series between the Chicago Cubs and St. Louis at Busch Stadium was postponed Friday night after two more Cardinals players and a staff member tested positive for the coronavirus.

Major League Baseball announced that the whole weekend set was off. Hours earlier, M.L.B. had said that Friday night’s game had been postponed to ensure everyone affected on the Cardinals could identified.

The Cardinals have been off since last Friday, when two players returned positive coronavirus tests. Eight players in total have tested positive, including star catcher Yadier Molina.

The Cardinals spent five days in quarantine in a Milwaukee hotel before finally being cleared to travel back to St. Louis late Tuesday, when they returned negative tests for the second straight day. They got workouts in at home and had been prepared to return to the field Friday.

St. Louis’s next game is scheduled for Monday at home against Pittsburgh. The Cubs are set to play next on Tuesday at Cleveland.

The Cardinals and the Miami Marlins have been hit hardest by virus outbreaks since M.L.B. started its shortened 60-game season. The Marlins missed more than a week before resuming play on Tuesday.

M.L.B. released its most recent testing numbers Friday. The league said there were 13,043 samples taken last week with 13 positive results for a 0.1 percent positivity rate. During the monitoring phase, there have been 53,826 overall samples that have returned 71 positives for a 0.1 percent positivity rate. Of those 71 positive results, 49 are players and 22 are staff members.

Among the players who confirmed they had tested positive for the coronavirus were Molina and Paul DeJong, both All-Stars.

Before Friday’s postponement, the Cardinals had already added three doubleheaders against the Brewers to a previously scheduled series to make up their three games postponed last weekend. Milwaukee will host doubleheaders Sept. 18 and 20 and will serve as the home team in the opener of a doubleheader in St. Louis on Sept. 25.

The Cardinals will make up this week’s series against the Detroit Tigers with doubleheaders Aug. 13 and Sept. 10. St. Louis had been scheduled to play the Chicago White Sox at the Field of Dreams in Iowa on Aug. 13. Those teams will play in Chicago on Aug. 14 instead.

Why Bombs Made in America Have Been Killing Civilians in Yemen

When Pet Owners Fall Ill With Coronavirus, What Happens Next?

When Hugs Can Kill: Mourning Nova Scotia’s Mass Shooting in a...

Patrick Reed and Jordan Spieth Get Back to Amiable Old Ways

Andrés Iniesta Plots a Return to Barcelona, Where the Beauty Is...