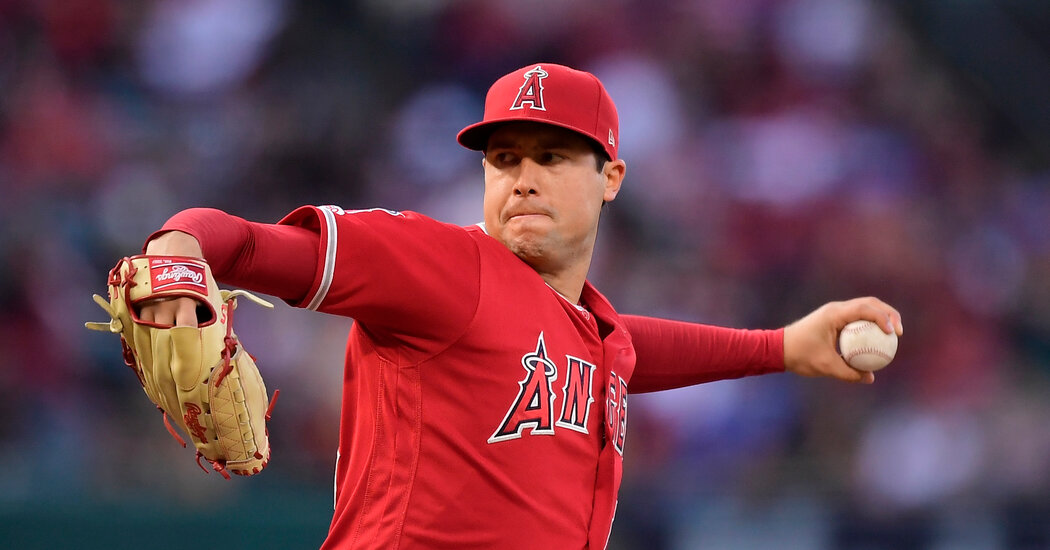 A former employee of the Los Angeles Angels was charged with conspiracy to distribute fentanyl in connection with the fatal overdose of Tyler Skaggs, a pitcher for the team, federal prosecutors announced on Friday.

The former employee, Eric Prescott Kay, who worked as the team’s communications director, surrendered himself in Fort Worth and appeared before a judge Friday morning, according to court records. Mr. Kay, 45, was released on bond.

“No one is immune from the deadly addictive nature of these drugs,” Erin Nealy Cox, the U.S. attorney for the Northern District of Texas, said at a news conference Friday morning.

“Suppressing the spread of fentanyl — and preventing tragedies like Tyler Skaggs’s and the thousands of other Americans who die every year from fentanyl overdoses — is a priority of the Department of Justice,” she added.

In July 2019, Mr. Skaggs, 27, was found dead in a hotel room at the Hilton Dallas Southlake Town Square Hotel just before his team was scheduled to play the Texas Rangers. An autopsy report released a month later revealed that Mr. Skaggs had fentanyl and oxycodone in his system at the time of his death.

The Tarrant County Medical Examiner’s Office later determined that Mr. Skaggs would not have died had he not consumed fentanyl, prosecutors said in a statement on Friday.

“The family is deeply heartbroken to learn that Tyler would be alive today were it not for a pill containing fentanyl that was provided by the director of communications of the Angels,” Rusty Hardin, a lawyer for Mr. Skaggs’s family, said in a statement on Friday.

Michael Molfetta and Reagan Wynn, lawyers for Mr. Kay, said in a statement on Friday that what happened to Mr. Skaggs was a tragedy, and that “addiction is a debilitating and destructive disease.”

“Today, our client, Eric Kay, willingly traveled to Texas from California to surrender himself,” they wrote. “Now he will patiently wait for his opportunity to make his story known.”

Fentanyl is a synthetic opioid that is 50 to 100 times more potent than morphine, Ms. Nealy Cox said. While a smaller portion is used for medical settings, the vast majority of fentanyl is illegally produced.

Many who overdose on fentanyl do not even know they took it, because dealers will often produce counterfeit drugs using fentanyl and then stamp on the manufacturer’s markings to make it look like they are pharmaceuticals, like oxycodone, a prescription pain killer, Ms. Nealy Cox said.

A criminal complaint filed on July 30 but unsealed on Friday reveals that investigators found several pills and white residue in Mr. Skaggs’s hotel room. An analysis later found that both a single blue pill that closely resembled a 30-milligram oxycodone tablet and the white residue contained fentanyl.

Five pink pills also found were determined to be legitimately manufactured five-milligram oxycodone pills that did not contain fentanyl. Several white pills were later found to be anti-inflammatories, according to the complaint.

In an initial interview with law enforcement, Mr. Kay said the last time he had seen Mr. Skaggs was when they checked into the hotel on June 30, 2019. He is also said to have denied knowing whether Mr. Skaggs used drugs.

Mr. Kay had also allegedly told someone that he had visited Mr. Skaggs’s room on the night he died, contrary to what Mr. Kay initially told law enforcement, the complaint said.

The Drug Enforcement Administration found that Mr. Kay had allegedly dealt the blue pills — variously called “blues” or “blue boys” — to Mr. Skaggs several times and to others. Several people who knew Mr. Kay and Mr. Skaggs allege that Mr. Kay provided 30-milligram oxycodone pills to Mr. Skaggs and others, the complaint said.

A former federal prosecutor conducted an independent investigation for the Angels, the team announced on Friday.

“We learned that there was unacceptable behavior inconsistent with our code of conduct, and we took steps to address it,” the Angels said in a statement. “Our investigation also confirmed that no one in management was aware, or informed, of any employee providing opioids to any player, nor that Tyler was using opioids.”

Mr. Skaggs’s family urged the Angels to make public the report from their investigation, according to Mr. Hardin’s statement.

“We are relieved that no one else who was supplied drugs by this Angels executive met the same fate as Tyler,” the family’s lawyer said. “While nothing will replace the loss of Tyler, we are very grateful to federal prosecutors for their diligent and ongoing work.”

Dave: 6 Things You Might Not Know About The Kevin Kline...

The Weird, Disturbing (and Comforting) Return of Pro Sports

Ending a Mystery, Spain Says Ex-King Is in U.A.E.

As Coronavirus Overruns Russia, Doctors Are Dying on the Front Lines