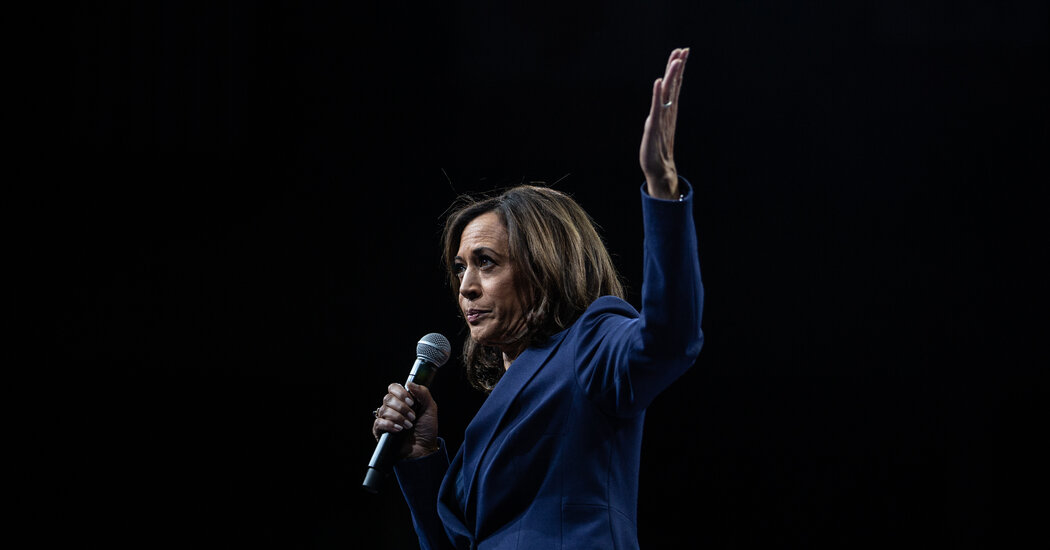 The Climate Equity Act, an expanded version of a bill Ms. Harris and Representative Alexandria Ocasio-Cortez, Democrat of New York, introduced last year, puts the environmental health of low-income communities of color at the center of efforts to reduce planet-warming greenhouse gases.

Environmental leaders said the move sent an important signal: Not only would a Biden-Harris ticket prioritize addressing climate change, but it would focus on ensuring communities already burdened by pollution would benefit from a transition to clean energy.

Equity and racial justice issues have become a core part of the Democratic Party’s plan for addressing climate change. A $2 trillion climate plan that Mr. Biden issued in July was titled the “Plan to Secure Environmental Justice and Equitable Opportunity in a Clean Energy Future” and set a goal that 40 percent of all clean energy spending would go to disadvantaged communities.

The addition to the ticket of Ms. Harris, who has a long history of working on environmental justice, is likely to ensure a focus on elevating the needs of communities of color, climate change leaders said.

“We hope we can have an administration that sees the climate crisis and even Covid-19 through the lens of understanding that systemic racism has made these crises even more burdensome for our communities,” said Kerene N. Tayloe, director of federal legislative affairs at WE ACT for Environmental Justice, a New York-based environmental justice group.

The Climate Equity Act would create a dedicated Office of Climate and Environmental Justice Accountability within the White House and require the federal government to rate the effect that every environmental legislation or regulation would have on low-income communities.

Trisha Dello Iacono, a national field manager with Moms Clean Air Force, an environmental group, worked closely with Ms. Harris’ staff in the development of the bill. She said it ensures that communities most affected by pollution will have a seat at the table in developing environmental policy. “If this is the last thing she does in the Senate, it’s a huge win for the environmental justice community,” Ms. Dello Iacono said.

Ms. Harris has faced some criticism on climate change. She did not raise the issue frequently during the first several months on the campaign trail during her own bid for the presidency, and she faced a backlash for choosing a fund-raiser over attending a CNN town hall forum on climate change, though she later reversed course. She also overstepped in claiming that she has sued Exxon Mobil to hold the oil company accountable for its role in climate change.

But in other ways she has been leading. Ms. Harris was an original co-sponsor of the Green New Deal, a plan to curb planet-warming greenhouse gas emissions while also addressing economic inequality. She has called for abolishing the filibuster if Republicans stand in the way of passing climate change legislation.

She also favors a ban on fracking, a position that could put her at odds with Mr. Biden, who has called for a ban on new leases on federal lands but stopped short of calling for a comprehensive ban.

President Trump’s campaign on Tuesday criticized Ms. Harris’ position on fracking as well as her support for the Green New Deal, saying both positions will lead to “economic catastrophe in natural gas states like Pennsylvania.”

When Ms. Harris released her climate plan — just ahead of the CNN forum — it called for a $10 trillion increase in spending over a decade as well as a price on carbon, with a dividend that is returned directly to households.

Mr. Ali, who currently serves as vice president of environmental justice at the National Wildlife Federation, said that addressing climate policy is broader than top-down measures like a carbon tax, and should include housing justice, public health and food security. He noted that Ms. Harris has spent several years working on issues like promoting safe drinking water in low-income communities.

Ms. Harris, he said, “is part of a new generation of leaders that are understanding that for us to be truly effective in addressing the climate crisis we have to include people in the process.”

E.P.A. Rejects Its Own Findings That a Pesticide Harms Children’s Brains

How to Make the Best Japanese Shokupan Milk Bread