NAIROBI, Kenya — The captain of the ship that ran aground in Mauritius and spilled about 1,000 tons of oil into the Indian Ocean has been arrested, his lawyer said on Tuesday.

The captain, Sunil Kumar Nandeshwar, was arraigned in a district court in the country’s capital, Port Louis, on the charge of endangering the safe navigation of a vessel, an offense under Mauritian maritime laws.

Mr. Nandeshwar, an Indian national, was arrested alongside the chief officer of the ship, Tilak Ratna Suboda, a Sri Lankan. The two were taken into police custody and will appear again in court on Aug. 25, Ilshad Munsoor, Mr. Nandeshwar’s lawyer, said in a phone interview.

The island nation of about 1.3 million people is still grappling with how to protect its world-renowned coral reefs and crystal-clear lagoons after the spill.

The MV Wakashio, a Japanese-owned Panama-flagged bulk carrier, went off course and grounded on a coral reef off the coast of the island nation on July 25. Less than two weeks later, the ship, carrying 4,000 tons of fuel oil, started leaking, leading to an ecological disaster that could have far-reaching consequences for the country’s food security, economy and tourism.

Local news media reported that a preliminary examination by the police showed the crew was having a party on the night the ship ran off course. 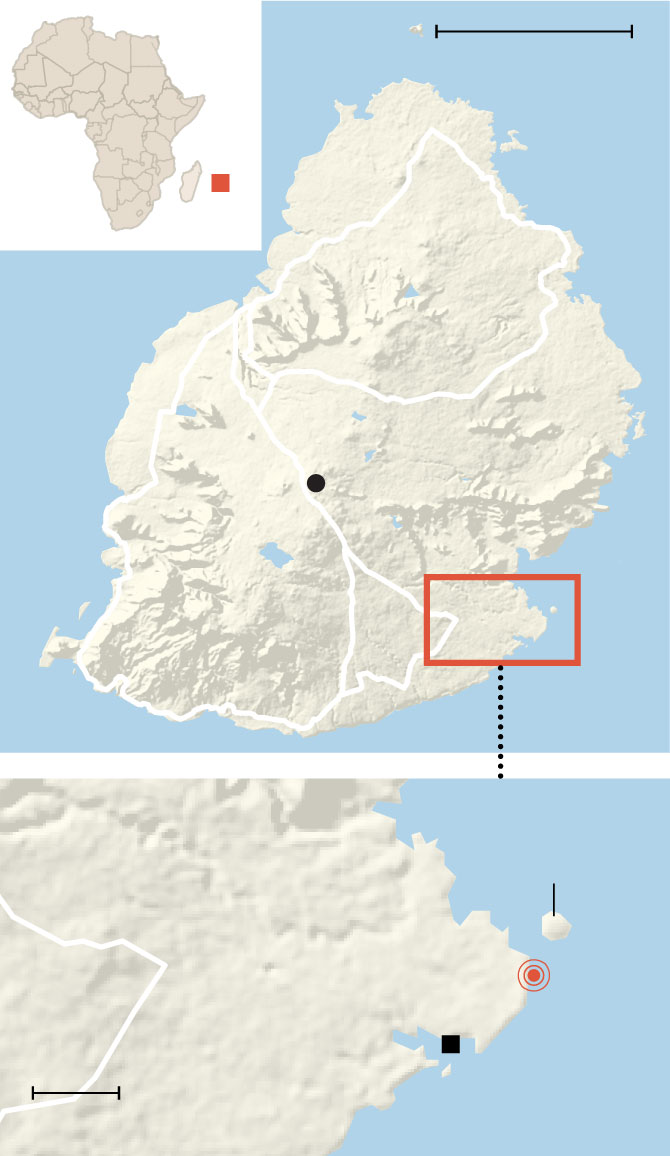 By the time authorities stopped the leak, 1,000 tons of oil had spilled into the sea, with the slick threatening environmentally sensitive zones like the Ile aux Aigrettes nature reserve and the Blue Bay Marine Park.

The authorities, who had been receiving support from countries including France and India, said on Saturday that the ship had ruptured in two. While much of the 3,000 tons of remaining oil had been extracted, there was still 90 tons of oil on the ship. To prevent any further damage, almost seven miles of protective booms have been positioned around the vessel and some parts of the island, the National Crisis Management Committee said on Monday.

Mauritius, which is off Africa’s eastern coast, is known for its picturesque beaches and coral reefs and mangrove forests that are teeming with rich biodiversity. Tourism is a key pillar of its economy, bringing about $1.6 billion in 2018.

But the pandemic and its resulting lockdown measures have limited that income this year. Hotels and parks remain empty as the suspension of international flights has kept foreign visitors out of the country.

Following the leak, thousands of Mauritians both inside and outside the country responded by donating money, creating awareness on social media and participating in cleanup efforts. Volunteers created artisanal booms and stuffed them with donated hair, sugar cane straws, plastic bottles and other items to stop the spread of the oil and soak it up.

Many Mauritians, however, remain angry at how the government responded to the wrecked ship and say officials should have acted more urgently before it started leaking. While welcoming the arrest of the captain on Tuesday, Reuben Pillay, the director of Reubs Vision, a company that provides virtual tours of Mauritius, said he still wanted more answers from the government.

“Will we know the truth?” Mr. Pillay asked of the ship and its running aground off the island’s coast. “We think that there is more to this story.”

356 Elephants Dropped Dead. Did This Bacteria Poison Them?

Moussa Traore, Longtime President of Mali, Is Dead at 83

Kashmir, Under Siege and Lockdown, Faces a Mental Health Crisis

Huge Crowds Around the Globe March in Solidarity Against Police Brutality

Mali Military Coup: Why the World Is Watching